Debut and break through album all in one. A-Ha didn't so much step into the limelight so much as they kicked the door in to the studio and rip the roof off so the sun could shine directly down upon them. Hunting High and Low is a fantastic and I dare say essential 80's album that if you haven't heard you need to.

The album launches right into it with Take on Me and from there keeps smacking you in the face with one after the other of great tracks. Granted none of them seemed to outshine the first track in terms of chart toppers, but don't let that discount them. 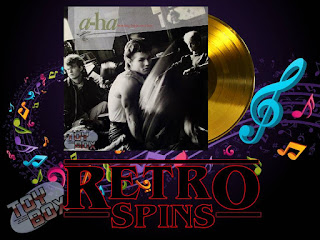 Many people consider the band to be a one hit wonder because they only tend to remember Take on Me. While it's true the track charted in July of 1985 and reached number one in October, it wasn't exactly their last hit. The Sun Always Shines on TV would also debut in November of that same year and make its way to number twenty by February of the following year. Cry Wolf from their follow up album also charted in 1987. Okay, fine neither was as popular or successful as their first hit, but still it's not like it was the only thing they had going for them. Let's also not forget their fantastic opening title track to 1987's Bond film, The Living Daylights.

What's interesting to note for me personally is that when I first listened to this album a couple of years ago I actually turned it off in disgust. However, when revisiting it for my Retro Spins post it had quite the opposite effect. I loved the thing from start to finish. So much so that I didn't even bother picking out single tracks to add to my Ipod. I ended up just adding the whole thing - All ten tracks. Granted as time goes by and I hear some of the songs again I may end up whittling this down.

The aspect that really drew me in was the voice of singer Morten Harket. Even on songs that didn't necessarily catch my attention beat or overall musically wise still sucked me in with his almost haunting and wide ranged voice. It's as if the songs were echoing in my head calling to me. I know, sounds weird in a way.

I would definitely recommend this album to any 80's music lover or someone looking to find a great album overall.

Click "HERE" to go back to the home page. For more posts related to this one, please click the labels below.
Posted by The Toy Box on November 27, 2018
Email ThisBlogThis!Share to TwitterShare to FacebookShare to Pinterest
Labels: 1985, 80's Album Review, 80's Music, 80's Music Review, A-Ha, Hunting High and Low, Music of the 80's, Retro Spins