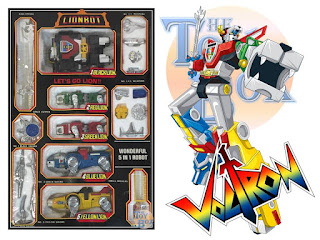 This particular version is made out of die cast metal / plastic and stands roughly eighteen to twenty-four inches when the lions are combined together. It also features a massive amount of weapons - One or more for each lion as well as the sword and shield for Voltron himself.

I remember only owning this bad boy for about a week or two when I stupidly lent it to a friend for a weekend. Said friend promptly broke the black lion, causing the thing to never be able to be combined again. I recall my dad asking me, "Did you learn a lesson?"

Not only did I never get a new Voltron, but dad wasn't able to fix it. So throughout its lifespan, until probably just thrown away, my four and a halfish lions could never again become Voltron, Defender of the Universe!

Unfortunately, I don't know who actually produced this particular version, nor can I pinpoint a specific year. There's nothing denoted on the actual box.

I know that Bandai produced a higher quality version for Japan / US released in 1982. So perhaps one can speculate the above is from the same time frame and perhaps even the exact same one. But, I'd be lying if I said I didn't prefer the above...Well, knock off version. It gets extra points for having been a part of my past.

Both versions are fairly readily available on secondary markets. However, they are both rather pricey and the Bandai one commonly doesn't come with the accessories. With that said, it only makes more sense to purchase the one from Taiwan.

Stick around as we cross 2018 off our list and spring into 2019 to see if Lionbot eventually makes its way into my collection. Until then, happy holidays and happy New Year from The Toy Box. For those who don't celebrate anything around this time of year, happy Monday! We'll see you in January.

Click "HERE" to go back to the home page. For more posts related to this one, please click the labels below.
Posted by The Toy Box on December 31, 2018
Email ThisBlogThis!Share to TwitterShare to FacebookShare to Pinterest
Labels: 1980's, Bandai, Lionbot, Voltron