Okay, I'm going to say this once and then move on...Tiffany sounds like one of those singers on a Smurf album in some of her songs. Distorted, high pitch, kind of grating if you listen too closely. You know what I mean if you've heard any of the numerous 80's Smurf cassettes (or records).

Tiffany gets knocked around a bit in the industry for not writing her own songs during the early years of her career, but it turns out this may not have been completely her fault. It appears, much like the Monkees, she was pointed towards the microphone and told, "Just go sing the song and otherwise shut up". Of course, that's just my loose interpretation of the matter (from online articles with the singer) and not necessarily verbatim fact.

What I don't actually like about her debut album is the engineering of it. John Kerns and Bill Smith seemed intent on using every parlor trick in the book to make the album sound almost cliche; Echos, distortions and such. I'm also not a fan of when Tiffany "gets into her songs" and sounds like a straining / croaking frog as she belts out a particular part of every single one of her songs as if this were her signature on each track. 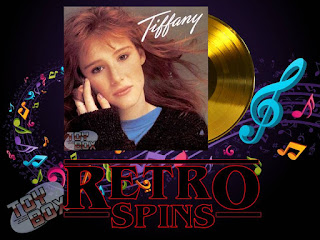 Despite this, there are decent tracks to be found on the album. In fact, I dare say the ones that didn't make it to the charts are actually better than the ones that did. Personally, I can't stand her rendition of "I Saw Him Standing There" (a re-make of the Beatles "I Saw Her Standing There"). The intro makes me cringe every time - Again, thanks to the parlor tricks engineering.

I ended up adding a combination of songs to my iTunes 80's playlist and to my iPod for the ol' shuffle; Should've Been Me,  Danny, Spanish Eyes, Feelings of Forever, I Think We're Alone Now...And yes, even I Saw Him Standing There, for no other reason than it was a hit of the 80's.

When she's not doing a Smurf impersonation or straining lyrics out in an attempt to sound "cool", you know, when she's just singing normally, she actually has a rather enjoyable voice. Despite not having written her own songs, she makes them her own.

Overall, there's no denying Tiffany had her era of popularity. She had two number one hits between 1987 and 1988 with I Think We're Alone Now and Could've Been. She also had top ten success with her rendition of I Saw Him Standing There and mild charting success with Feelings of Forever. Mind you, that's just from this particular album. Tiffany would go on to have an additional hit from her follow up album Hold an Old Friend's Hand. So, you know, you can't exactly hate on that.

Much like many artists of the 80's, the 1990's were not kind to Tiffany, and she soon sunk into retro pop culture history. However, she wasn't down for the count. Tiffany re-emerged in 2000 and since then has released a steady stream of albums - None of which I have heard or care to. I'll stick with albums from the 80's.

Click "HERE" to go back to the home page. For more posts related to this one, please click the labels below.
Posted by The Toy Box on December 18, 2018
Email ThisBlogThis!Share to TwitterShare to FacebookShare to Pinterest
Labels: 1987, 80's Album Review, 80's Music, 80's Music Review, Music of the 80's, Retro Spins, Tiffany