1980 was an interesting year for music. New wave pop was trying to burst onto the scene while disco struggled to stay relevant. Many bands found a solid foot hold with a combination of both styles. Of course, then there was Cheech and Chong.

Yup, despite the 60's being long over and the 70's winding down, these two were determined to show the 80's that stoner comedy could still be funny...And boy was it. Let's Make A New Dope Deal was the duo's first entry into the 80's and consequently only one of two comedy albums they released in the decade. While it doesn't necessarily rank as their best, it still chalk full of solid skits which will leave most people with a twisted or childish sense of humor rolling on the floor in stitches. 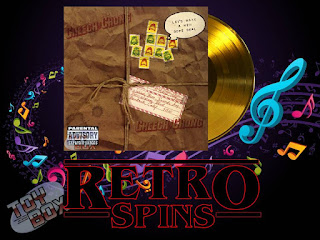 The first half of the album has five tracks which transition into each other and follow the same group of characters; Margaret, Father and the band, The Bloaters. Meanwhile, the second half of the album consists of five mini skits, each separate from themselves. For fans of prior Cheech and Chong comedy albums, you're probably familiar with the character Bob who comes back for the title track, "Let's Make A New Dope Deal".

For me, I have a lot of fond memories of sitting on the floor with my brother and giggling with each other as we listen to the various Cheech and Chong cassettes from back in the day - Low enough of course that mom and dad didn't hear them of course. It's great to see that their albums still hold up to this day and still leave me giggling at certain parts.

Cheech and Chong is definitely an acquired taste. It's pure stoner comedy, slightly racist and definitely not what people these days would call politically correct. If you're down with a session of giggling, check out a Cheech and Chong album of two (or more).

Click "HERE" to go back to the home page. For more posts related to this one, please click the labels below.
Posted by The Toy Box on December 25, 2018
Email ThisBlogThis!Share to TwitterShare to FacebookShare to Pinterest
Labels: 1980, 80's Album Review, 80's Music, 80's Music Review, Cheech and Chong, Let's Make A New Dope Deal, Music of the 80's, Retro Spins