Matthew Wilder may have had a smash hit with Break My Stride, but that's kind of where this album starts and stops in terms of being good - Literally. It's the first song and you can pretty much stop there if you want to have heard the best there is to offer on the album.
The album, which was released in July of 1983, was the first album for Wilder and didn't find immediate success. It wouldn't be until September that Break My Stride would enter the charts and it would take until February of 1984 before the song would gradually climb to the number five spot on the charts (February 4) where it would stay for three consecutive weeks before drifting off.

The Kids American, which is coincidentally the second track on the album (What, did people only listen to the first two songs before calling it quits?) charted in February of 1984 and would eventually peak at number thirty-three. However, this would be the last track from the album to chart. 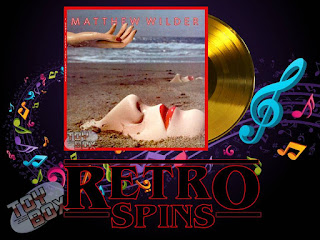 Wilder would only see the charts one more time with the title track of his 1984 follow up album, Bouncin' Off the Walls which hit the charts at number seventy-eight in September, but disappeared the week after. Much like the song being Wilder's last "hit", it was the last album he released before disappearing from the spotlight. He now spends most of his time behind the scenes and has been credited for producing such bands / singers as No Doubt, Christina Aguilera, Kelly Clarkson and Miley Cyrus (and admittedly I don't know who any of these people are beyond No Doubt).

Okay, the album isn't the best, but it's not terrible. Of course Break My Stride is the stand out from it, but there's others which are tolerable. The Kid's American has a cheesy 80's dance beat to it and you can picture kids in their neon clothes tapping their Van or Converse covered feet to the beat. I Don't Speak the Language also sticks out as decent. Unfortunately that's about where it ends.

Stand out worst track has to be Ladder of Lovers. This ballad is cringe worthy bad. Wilder comes off as creepy how his voice sounds. It was so bad I actually had to skip it - Something I really try not to do for my Retro Spin playthroughs.

This is definitely not an album I'll need to hear again in the future, but Break My Stride will always be a part of my play list.

Click "HERE" to go back to the home page. For more posts related to this one, please click the labels below.
Posted by The Toy Box on December 11, 2018
Email ThisBlogThis!Share to TwitterShare to FacebookShare to Pinterest
Labels: 1983, 80's Album Review, 80's Music, 80's Music Review, I Don't Speak the Language, Matthew Wilder, Music of the 80's, Retro Spins