When Prince comes to you and says he admires your talent so much that he wrote a song for you to have for your next album you take it and run to the bank! That's exactly what (the) Bangles did with their (Prince's) hit Manic Monday.

Different Light delivers song after song (for the most part) and it all starts with the aforementioned Manic Monday. From there the band continues its hard rock opus with tracks such as In A Different Light, Walking Down Your Street and of course the ever popular Walk Like An Egyptian. The Bangles also show their ability to deliver on ballads such as If She Knew What She Wants (in addition to Manic Monday). 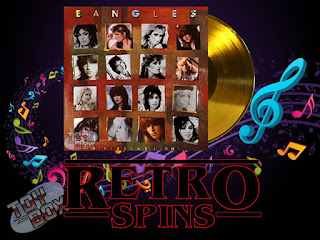 With the talent of Susanna Hoffs, Vicki Peterson, Micki Steele and Debbie Peterson combined, the band delivers a solid album. Sure, there are duds to be found. I personally didn't care much for the rhythm and blues style Return Post or the bubblegum style Let it Go and Not Like You. Still, the album fluidly transitions from track to track rather nicely and despite some songs that weren't my personal favorite, they fit in to keep things flowing nicely.

Though only four tracks charted from the album (Manic Monday, Walk Like An Egyptian, If She Knew What She Wants and Walking Down Your Street), these songs were enough to stay in the spotlight for almost two full years. Even the follow up hit Hazy Shade of Winter from the film Less Than Zero (and never available on a Bangles studio album - only compilations) slammed the charts hard. In other words, the band proved they were here to stay as a quintessential quartet of the 80's.

Overall the album has a lot of appeal. It's hard hitting at times, soft in other sections but overall fun. Plus it's got massive hits which were staples of the 80's. I ended up with six songs on my Ipod and since I've already mentioned most of them above I won't bother relisting them all. Suffice to say it was all four hits as well as the songs In A Different Light and Following.

Click "HERE" to go back to the home page. For more posts related to this one, please click the labels below.
Posted by The Toy Box on December 04, 2018
Email ThisBlogThis!Share to TwitterShare to FacebookShare to Pinterest
Labels: 1986, 80's Album Review, 80's Music, 80's Music Review, Bangles, Different Light, Music of the 80's, Retro Spins