Retro Spins: Chaka Khan - I Feel For You

Chaka Khan's I Feel For You has been a staple of 80's greatest hits albums since it first entered the charts in September of 1984, but nobody really says much about the album itself. So I ask, what's the inside scoop with it?

While I Feel For You may be Khan's most popular hit to date, the truth of the matter is she didn't write it. Rather, it's an original song from Prince which appear on his 1979 self titled album in a much slower format. As much as I like Prince I have to admit that Khan's rendition is far superior and featured notable artists such as Grandmaster Melle Mel (considered to be one of the pioneers of rap music) and Stevie Wonder (who pretty much everyone knows for his contributions to Motown and of course some hits of the 80's). 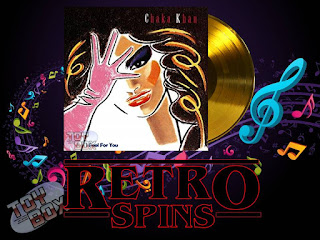 I Feel For you was released in October of 1984 and though it featured numerous singles, I honestly had never heard any of them other than the title track. However, this is no surprise since this would be the only song to come from the singer which she is typically remember for by most people.

The title track climbed up to the number three spot by November of 1984 and held the position for three consecutive weeks before descending down. Through the fire debuted on the charts in April of 1985, but disappeared the following week. It would be the last track from the album to chart.

Despite the album having been around over thirty years, 2018 was the first time I sat down and listed to it from start to finish. The verdict - Honestly, not very good. The album has a very downbeat temp for the first five tracks and sounds like something you'd try to tune out at a Vegas casino playing over the muzak system. It crawls through this adult contemporary style from song to song...

...Then track six hits with I Feel For You and the albums tempo changes completely to a little more upbeat. However, nothing really seems to stand out beyond the title track. It was disappointing in a way because I really expected something great here.

Overall, I was happier when it all ended versus when I was listening to it. In fact, when I looked at the CD cover and then at the player after what seemed like an hour of the music droning on I said out loud, "This is only track two?!?!" It was miserable to sit through this album.

I have no desire to hear anything else from Chaka Khan and quite honestly I don't think I could even stomach hearing I Feel For You ever again because it would just remind me of how terrible this album was.

Click "HERE" to go back to the home page. For more posts related to this one, please click the labels below.
Posted by The Toy Box on November 13, 2018
Email ThisBlogThis!Share to TwitterShare to FacebookShare to Pinterest
Labels: 1984, 80's Album Review, 80's Music, 80's Music Review, Chaka Khan, I Feel For You, Music of the 80's, Retro Spins