It's no easy task getting people in predominantly English speaking countries to listen to your music when it's of a foreign language. It's even more so difficult to hit the charts of said countries. Falco did both.

Despite his homeland hit, Der Kommissar, Falco was struggling to find the success and popularity he sought. As a result, he began broadening his music to incorporate English lyrics. His hope - To gain the audience of folks in the USA, UK and other such predominant English speaking countries. The result? A number one hit, fame, fortune and disappointment.

Falco released Falco 3 in October of 1985 and waited in anticipation to see the fruits of his labor pay off. In February of 1986, Rock Me Amadeus debuted on the charts at seventy-nine and from there the singer's life changed drastically. The song flew to number one in a matter of weeks and stayed there for three consecutive weeks. 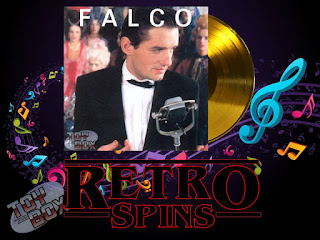 As the song remained in the top ten during April of that same year, Vienna Calling made its debut at number seventy. The second single didn't fare as well, only making its way to number eighteen before drifting back down.

By July, Falco was off the charts the charts completely in the US and didn't return despite his every effort with follow up albums between 1986 and 1998. He never again found the success he originally had with Rock Me Amadeus.

While Falco unfortunately was killed in a car accident in February of 1998, he continues to have albums put out on his behalf posthumously. Sadly, none of those have found any commercial success outside of German speaking countries.

The album is a pretty good compilation of tracks. Rock Me Amadeus and Vienna Calling are far from the only hits you can find here. America, Jeanny and Manner Des Westens equally stand up to the level Amadeus set. In fact, they may even be better. Granted, I highly recommend not reading any of the translated lyrics for any of the songs as they certainly don't come across as interesting when you actually know what is being said. Sometimes ignorance is bliss.

One of the things which was important for me when locating and buying this album was getting the specific version I owned as a kid. See, while the German release of the album includes all the same tracks (theoretically), the US versions of Rock Me Amadeus and Vienna Calling are different mixes. Because I was accustomed to hearing the Salieri mix of Amadeus and the Metternich Arrival mix for Vienna I definitely wanted to have these versions on the CD. At the time I was in the market for this CD this was actually proving to be a difficult task. However, these days the album seems more common.

Click "HERE" to go back to the home page. For more posts related to this one, please click the labels below.
Posted by The Toy Box on November 06, 2018
Email ThisBlogThis!Share to TwitterShare to FacebookShare to Pinterest
Labels: 1985, 3, 80's Album Review, 80's Music, 80's Music Review, Falco, Music of the 80's, Retro Spins
Newer Post Older Post Home