George Lucas is no stranger to being immortalized in plastic. He's found his way to three different action figures in various Star Wars waves produced by Hasbro throughout the new Millennium. However, all of these have been portrayed as some form of character; an X-Wing Pilot, a Stormtrooper or alien from another world. To date Hasbro has never produced a simple George Lucas figure in his iconic jeans and plaid shirt which fans across the globe have come to recognize him. 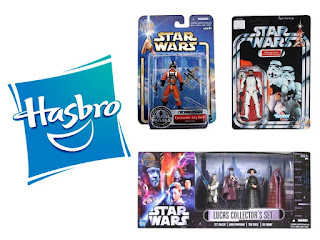 In 2000, Hot Toys helped collectors out in that department, but in a hush-hush secretive way. They released a line entitled Famous Type Figure and inside the box was a very familiar face in a very familiar looking outfit, but with no name. 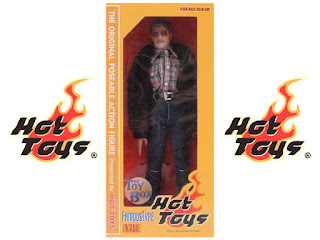 Yes, to get around any legal obligations, Hot Toys didn't come forward and outright call the figure, George Lucas. However, keen eyed fans were quick to catch on to what and who it was.

The limited run of figures were quickly swooped up and sank into toydum obscurity where not many people would come to know about it. This in turn has made it one hot collectible to fans of Star Wars or in general the work of George Lucas.

If you were to find one these days, you can expect to pay upwards of $700.00 to $1,000.00 - mint in the box. What's interesting is that they seem to show up in clusters. Meaning when you do find one, you'll find about three or four of them, then they'll disappear once again into obscurity for a little while before popping up again.

Click "HERE" to go back to the home page. For more posts related to this one, please click the labels below.
Posted by The Toy Box on November 26, 2018
Email ThisBlogThis!Share to TwitterShare to FacebookShare to Pinterest
Labels: 2000's, 2010's, George Lucas, Hasbro, Hot Toys, Star Wars, Star Wars Saga, The Saga Collection