Retro Spins: Eurythmics - Sweet Dreams (Are Made of This)

Eurythmics
Sweet Dreams (Are Made of This)
1983

I respect and appreciate what the 1983 Eurythmics album, Sweet Dreams (Are Made of This) is attempting to do. Its paving the way (among other artists of the era) for the synthpop new wave style which was quickly approaching in the early 80's.

The album was not only a commercial success for the band, but also their break through album they desperately needed. The title track hit hard in 1983, debuting on the charts in May and vaulted all the way to the number one spot (after remaining in number 2 for four consecutive weeks) in September of that same year.

As the track began its decent down the charts, it was joined by Love is A Stranger which debuted at number 81 (also in September). Unfortunately this would only go to number 29 before dropping back down and eventually off the charts.

Though this would be the last chart topper from the album, the Eurythmics were just getting started. Their follow up album Touch, also released in 1983 (November), began hitting the charts by early 1984. 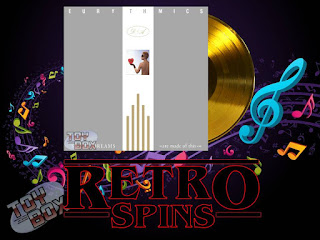 Lennox herself was praised for her stage performances and music videos which showcased the singer assuming both a male and female persona. My personal favorite is the 1984 Grammy performance of Sweet Dreams (Are Made of This). In fact, this particular award show is memorable for a lot of reasons and I highly recommend you watch the entire show (or at least the music guests). It's fantastic!

I digress though. Let's get back to the album at hand.

No, I wouldn't say there are any hits on this album beyond the title track. However, it's not bad as a whole. The album flows well from track to track and as I said above, I appreciate what it was doing for the new wave synthpop era.

There are decent songs to be found on this album and I did add a few to my itunes 80's mix. However, with that said, I didn't add these tracks to my Ipod itself because I can't honestly see myself actively wanting to hear them. These songs included; Jennifer, This is the House and Somebody Told Me.

Overall it's not a bad album. It's just not one with many songs with high replay value for me personally. But, that's just my opinion, and like all my Retro Spin posts, I would never expect anyone to take my word on any album. Listen to them for yourself and make your own decision.

Click "HERE" to go back to the home page. For more posts related to this one, please click the labels below.
Posted by The Toy Box on November 20, 2018
Email ThisBlogThis!Share to TwitterShare to FacebookShare to Pinterest
Labels: 1983, 80's Album Review, 80's Music, 80's Music Review, Eurythmics, Music of the 80's, Retro Spins, Sweet Dreams Are Made of This