♫♫♫ The Squirt Robot - More than meets the I have the power? 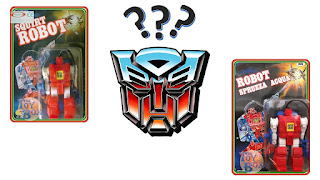 He is Squirt Robot - Or Robot Spruzza Acqua - translated in English from Italian as Robot Spray Water. The figure is so deeply rooted in 1980's nostalgia, yet many collector's have no clue what he's all about. Most fans passing by the figure would suspect it to be nothing short of a Transformers knock off. To some this would be an interesting enough aspect to make them take a second look, and possibly buy it. However, if you're strictly in it for a Transformers reason, you'll soon find yourself disappointed.

Squirt Robot here has an incredibly fun story / history surrounding him, and oddly enough, it leads back to Mattel's original Masters Of The Universe line, and from there grows out even further.

In the 1985 Mattel catalog, the Evil Robot prototype was showcased in a full page spread. The figure / character was captioned as serving Skeletor and his Evil Warriors - Despite his colors and bat insignia associating him to Hordak and his Evil Horde.

The figure would have incorporated a mechanism allowing it to throw water from his rifle when moving his right arm. Though we're not sure why the figure was scrapped in the long run, we can speculate about it all day. Our guess would be that its overall look and design simply didn't fit into the MotU style of figures. What's your theory? Share it in the comment section. 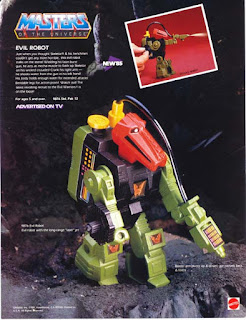 Despite being dropped by Mattel, LJN picked up the mold, and incorporated it into their Voltron line with a newly molded hydro-cannon. We searched briefly, but couldn't find the particular figure that this mold was used for. Please share in the comments section if you're a Voltran fan, and have any information.

Fast forward to some point in the 1990's when Gig Italian produced the subject piece in question - Squirt Robot. Obviously the head of Evil Robot didn't make it into the equation, and the paint scheme was changed to red and white. Unfortunately the cardback has no date markings, so we're unable to narrow it down to the specific year the figure was produced.

The mold has since been reused by a Chinese company that is producing multiple colors of the robot under a different name.

Not a bad bit of history for what would become a unique foreign figure - Or bootleg if you will. We love how it has roots in so many classic 1980's toy lines. These are truly the gems in collecting that make unique conversation pieces.

For a bit more information, you can check our our main source for this article "HERE". It's not the most well written article in terms of grammar and spelling, but it shares some good information on the subject if you can make it through it.

Prices are all over the map for folks looking to track one down. While he's not in abundance, there are a few to be found here and there. Unfortunately prices have ranged from $34.00 for poor carded versions, to almost $80.00 for mint loose ones. It's possible that the main driving force behind the price is based on collector knowledge. Meaning if someone who thinks it's a neat bootleg Transformer figure finds it, they may offer a low price. If someone knowledgeable about the figures history / roots is looking then a bidding war might occur, and prices drive upwards. All speculation of course.

Click "HERE" to go back to the home page. For more posts related to this one, please click the labels below.
Posted by The Toy Box on March 28, 2016
Email ThisBlogThis!Share to TwitterShare to FacebookShare to Pinterest
Labels: 1980's, 1990's, Gig, Hasbro, LJN, Masters of the Universe, Mattel, The Transformers, Transformers, Voltron