Superman The Movie (Madelman AKA Madel)

Superman The Movie
Madelman (AKA Madel)
1979

Madelman was a toy manufacturer in Spain that produced numerous six inch action figures between 1968 and 1980. Their style was much like those of the classic USA Mego produced toys. However, unlike Mego's Superman figure, Madelman, also known as  Madel, centered their packaging around the newly released Superman The Movie - A classic unto itself that could envelop an entire post just discussing the film itself. 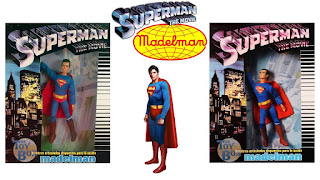 Admittedly our knowledge of toys doesn't extend far beyond the USA shores. However, from what we've been able to find, there appear to be two different packaging versions for the figure. Both feature a backdrop of the Fortress of Solitude, just with very slight painting variations. The figures are also posed slightly different inside the box.

Superman features quite a bit of articulation, bending at the knees, feet and elbows. He also features the standard bend in the legs for sitting down positions, and typical 360 degree arm rotations at the shoulder. Last, his head is on a swivel joint, allowing for 360 degree turning. All and all, it's a fairly good quality figure akin to the time period it was developed in.

Though we get, and love the helicopter, or as it's respectively titled on the package, "Helicoptero", we admittedly are confused by the dune buggy. We'll admit that in terms of Superman we really don't have the most vast knowledge beyond the basics, but even in our circles we've never heard stories of the time that Superman was tooling around the beach in his buggy - Not that it didn't happen. There were a lot of zany stories written in the 60's and 70's. 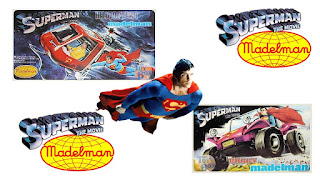 Back to the helicopter, this is a great piece for recreating the scene from the film where we first see Superman in full action as he swoops up the side of the Daily Planet to catch the falling helicopter hovering over the edge of the building with a dangling Lois Lane clutching on the seat belt for dear life. Granted you won't find a Lois Lane in the series - Or anyone else beyond Superman for that matter.

Here's where things go South for fans looking to add these pieces to their collection. For starters, they're rare - Really rare. The figures can be found easier (not easy, just easier) than the vehicles, but not in abundance. Next up, because they're rare, they're expensive. A mint in the package figure can set you back between $300.00 and $450.00. Loose figures will still set you back between $200.00 to $250.00 - However those are even more scarce than sealed one.

We've yet to see someone selling a buggy on secondary markets, so we have no price point to share in regards to that item. We have seen a few helicopters, both open and sealed, and this is where it gets uglier. The last sale for one of the helicopters was an opened piece with a box that not only was torn up, but looked like it had mold / mildew on it. The vehicle itself was fairly banged up, with the seat belts broken. This item still sold for around $400.00. We can only imagine what a mint in the box one would set you back these days. As we said above, the vehicles are more so scarce than the figure, so don't except to find many of them out there.

Click "HERE" to go back to the home page. For more posts related to this one, please click the labels below.
Posted by The Toy Box on March 10, 2016
Email ThisBlogThis!Share to TwitterShare to FacebookShare to Pinterest
Labels: 1790's, Christopher Reeves, Madel, Madelman, Marx Toys, Mego, Superman, Warner Brothers