Not to be confused with Grendal, one of the three primary antagonists from Beowulf, nor the Dutch music group. For that matter, it shouldn't be mistaken for the 1971 novel by John Gardner. No, this particular Grendal is the writer / assassin / New York City crime boss created by Matt Wagner, and first published by Comico Comics (now published by Dark Horse Comics) in the pages of Comico Primer. 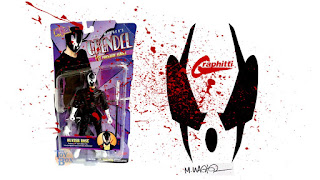 Wagner was given the green light to proceed with a series based on the character under his own banner titled comics in 1983. Unfortunately that deal was cancelled shortly thereafter due to Comico Comics financial difficulties. Since Wagner retained the rights to the character, he took the opportunity to retool the character, and re-launch him in the pages of Grendel: Devil by the Deeds, a serial back-up story to Wagner's series, Mage...(continued below)

Graphitti Designs' initial depiction in plastic of Grendal was based on the first iteration of the character, Hunter Rose. The figure was produced in 1998, and sold mostly in specialty / comic book shops. The figure is actually part of the line known as '98 Premiere Series which also featured Madman and Mage (a post for another time).

(continued from above)...Then entered Christine Spar, Hunter's posthumous biographer. Spar took up the mantle of Grendel in a story based on revenge. Sadly, it doesn't work out for her in the end. 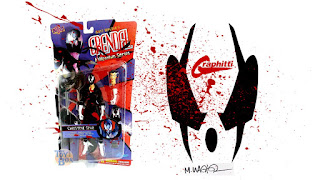 The Grendal series once again returned to the identity of Hunter Rose, but this was only briefly. From there, the series sprung even further into the future where the persona of Grendal took on many identities.

Unfortunately for the character the rights got tied up for several years due to the Comico Comics bankruptcy. Once all the issues were resolved, Grendal reemerged in the pages of the Dark Horse Comics series, Grendal: War Child. Since then, Wagner has occasionally returned to pen short stories based on Hunter Rose.

These days, Grendal gets published more so on a mirco-series / one shot story basis. His latest outing (as of this post) was the 2014 Grendal Vs. The Shadow.

Graphitti Designs' second depiction in plastic of Grendal was based on the second iteration of the character, Christine Spar. The figure was produced in 2001, and was part of the Millennium Series which also featured Hellboy and Spirit (a post possibly coming in the future).

Click "HERE" to go back to the home page. For more posts related to this one, please click the labels below.
Posted by The Toy Box on March 17, 2016
Email ThisBlogThis!Share to TwitterShare to FacebookShare to Pinterest
Labels: '98 Premiere Series, 1990's, 2000's, Graphitti Designs, Grendel, Matt Wagner, Millennium Series