When one collect's Toy Biz Marvel lines, it's key to be thorough and educated in all the various subsets that plastered the market between the 1990's and 2000's. There are so many teeny tiny lines that got folded into the mix that it can quickly become a daunting task just to compile a list of everything to determine what you want to buy.

Today we're looking at the Silver Age line. These figures hit the market in 2000, and were only made available via specialty shops that ordered from the monthly catalog, Previews - Thus the "Previews Exclusive" logo at the bottom of the packaging.

We'll take a moment to discuss the various ages of comic books for those not familiar with them. Though the dates themselves have been argued among collectors, Overstreet appears to have come up with a widely accepted name for them. They are as follows;

This is the age that gave birth to the super hero, and ushered in the iconic characters such as Superman, Batman, Human Torch and Namor. A good majority of these stores focused on WWII related topics.

When America became infatuated with the atom, this ushered in The Atom Age of comics. Super heroes were out. Science Fiction and Horror were in. This era issued in the birth of the Comics Code due to the graphic nature of many of the books, as well as their "adult" content.

Probably the most popular era of comic books to many collectors, The Silver Age was the epic period of Jack Kirby and Stan Lee. Essentially, it was the birth of the Marvel Universe.

Anti-heroes, and in general, darker and grittier books were ushered in with The Bronze Age. Though the anti-hero wasn't created in this era, it was certainly defined. Characters such as The Punisher left their mark in many of the titles encompassed in the Marvel Universe.

This was the era of many independent publishers trying to break out into main stream comic book publishing. One of the most popular for this era, and the perfect example would be Eastman and Larid's Teenage Mutant Ninja Turtles.

Artists of this era found that they themselves had appeal to comic collectors, and not necessarily just the characters they were currently working on. The result of this was the birth of companies such as Image Comics, Top Cow, Etc. This era was also burdened with the chase cover variants which eventually led to the implosion of the comic book market.

Though a new era has yet to be established, many comic collectors feel that around 2004 a new era was ushered in. This shift in comics was basically a result of incentive covers that publishers were pushing on the market. These limited edition covers (some as scarce as 1 in 5,000) became more so coveted by collectors than the actual stories contained within the pages of the books. If we had any sway in the market, we would definitely push for 2004 to Current to be labeled as "The Incentive Era".

The point to all of this is that the characters portrayed in the line below are based on comic characters from that particular era of time. So no, you won't find your Wolverines or your Punishers in this series. Instead, what you will find is; 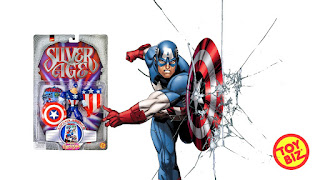 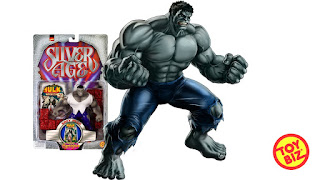 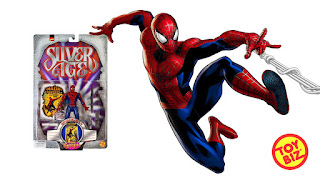 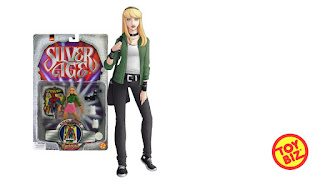 In terms of Toy Biz sets, this one isn't too bank breaking. A full set mint on the card can be obtained for about $25.00. That's essentially still around retail prices (if not a little cheaper).

Click "HERE" to go back to the home page. For more posts related to this one, please click the labels below.
Posted by The Toy Box on March 21, 2016
Email ThisBlogThis!Share to TwitterShare to FacebookShare to Pinterest
Labels: 2000's, Captain America, Gwen Stacy, Hulk, Incredible Hulk, Marvel Comics, Previews, Silver Age, Spider-Man, The Amazing Spider-Man, Toy Biz