Three in a row based on the Caped Crusader? We promise to take a break from Batman after this one - Probably not a long one, but a break nonetheless.

Knightfall is hands down one of the greatest Batman stories ever told. Jean Paul Valley's portrayal of Batman as a ruthless vigilante that would go to any means necessary to stop crime (to and include murder) was jaw dropping at times. Then on top of that you also get the heart of the story itself which was Bruce Wayne having his back broken by Bane. The story delivered on so many levels!

Of course to get that whole story, one would need to stick with both monthly Batman titles being published between 1993 and 1994 - Batman and Detective Comics (respectively). The entire story spanned across a trilogy known as Knightfall, Knightquest and KnightsEnd - Or as they are unofficially referred to in their trade paperback collection as, The KnightSaga.

To sum this all up - If you haven't read it, you should.

Somewhat late to the party, but still well received was DC Direct's line of figures based on the trilogy. The biggest shame here is how small the series was. Personally, we would have loved to see a rogue of villains released here. It was the perfect opportunity to incorporate classics such as Penguin, Joker, Riddler and more as they all appeared in the comic series during this particular story. 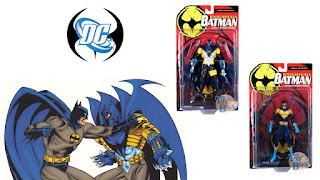 Bane and Catwoman are the two most highly sought after figures in the series. As such, they can garner between $50.00 and $70.00 each, mint on card. The remaining figures are typically priced between $20.00 and $30.00, but the reality of the matter is that the average going price is around $15.00 for them. 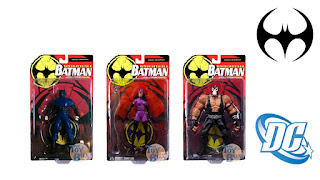 The entire KnightSaga has not only been collected in trade paperback versions numerous times over, but it's also available in novel format - Written by Dennis O'Neil. For those not into reading, fear not. You can also enjoy the story in audiobook format.

To sum this all up (again) - If you haven't read it, you should...Or at the very least listen to it.

Click "HERE" to go back to the home page. For more posts related to this one, please click the labels below.
Posted by The Toy Box on March 07, 2016
Email ThisBlogThis!Share to TwitterShare to FacebookShare to Pinterest
Labels: 2000's, Batman, DC Comics, DC Direct, Knightfall