Dune is one of those sci-fi series that you either love or hate. At least that's how it is with the people we know. The series was created by Frank Herbert for the 1965 novel of the same name, and since then has gone on to be adapted into television, movies, comics, and seen several more novelizations which all take place in its universe.

In 1984, LJN procured the rights to produce a series of toys based on the film adaptation staring the likes of Kyle MacLachlan, Sting, Sean Young, and a relatively unknown Patrick Stewart. The film was poorly received by most critics who found it to be confusing, cheaply produced, and some even went as far as to call it the worst film of the year.

As a result, the toy line did horribly, which was a shame because unlike most of LJN's work at the time, this line didn't turn out all that bad. The figures were fairly spot on to their screen renditions (by the era's standards of sculpting anyway). Only six figures ended up hitting store shelves, though eight were initially planned. 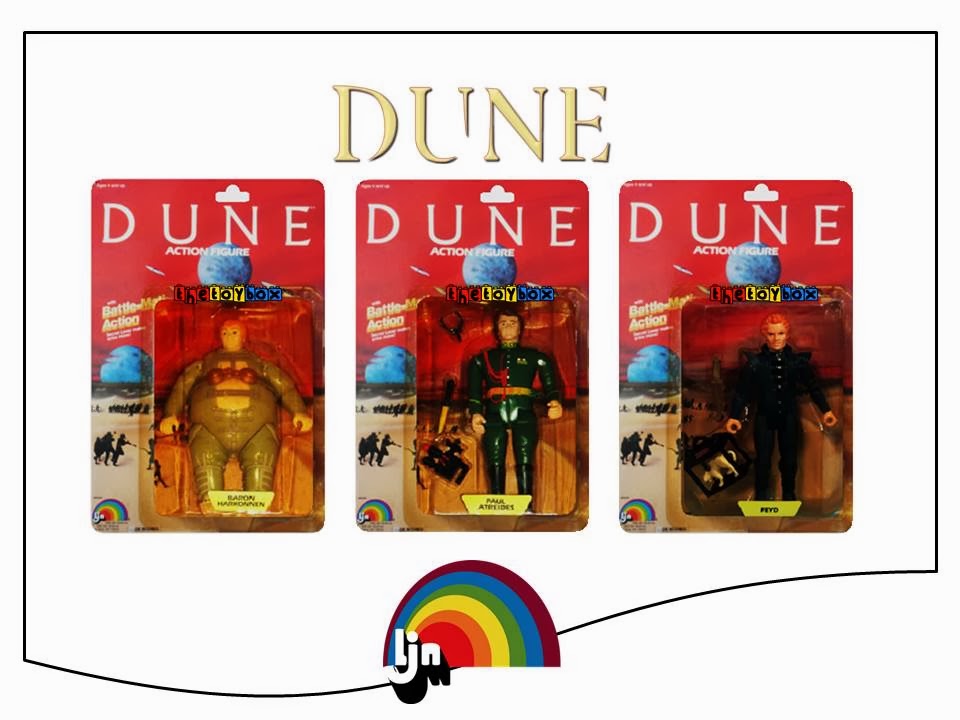 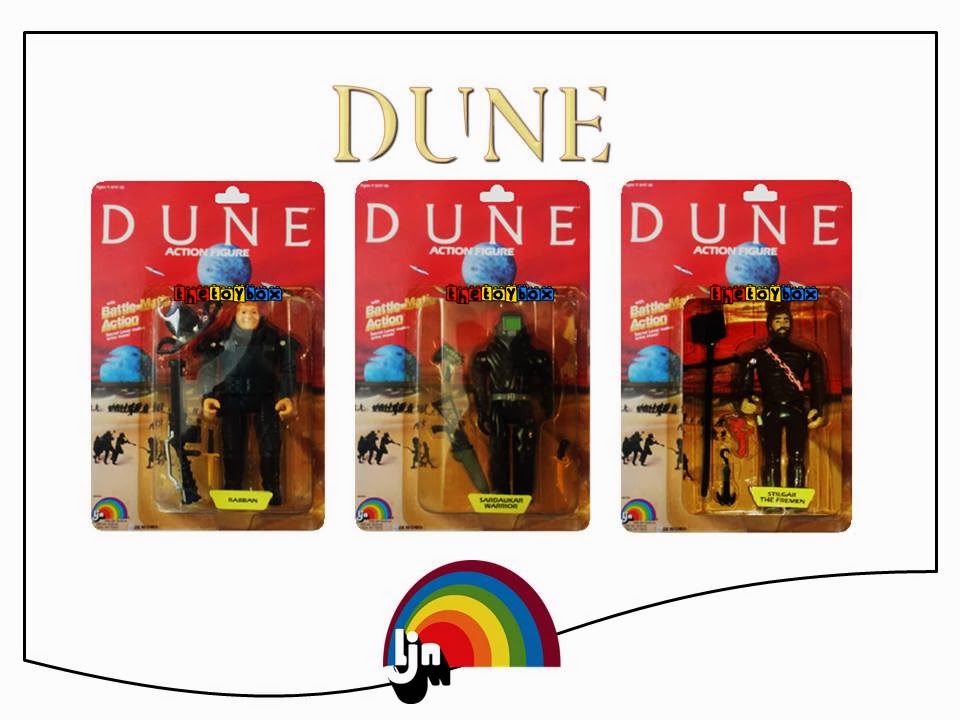 Rabban*Sardaukar Warrior*Stilgar the Freman
The two scheduled, but unproduced figures mentioned above were Gurney Halleck and Lady Jessica. Finished prototypes of the figures are known to exist, and were even used in the 1984 LJN catalog which advertised the entire line of toys.
One of the best items to come out of the series was the Sandworm. This creature was just awesome for its time, and even today stands out as a well put together piece of plastic. An interesting bit of history on the packaging of the Dune toys was that the Sandworm actually had a yellow rectangle painted over it, and in big bold black letters it read, "Top Secret".
The Spice Scout was a funky looking vehicle, and the only one produced for the line that could be incorporated with the figures above. 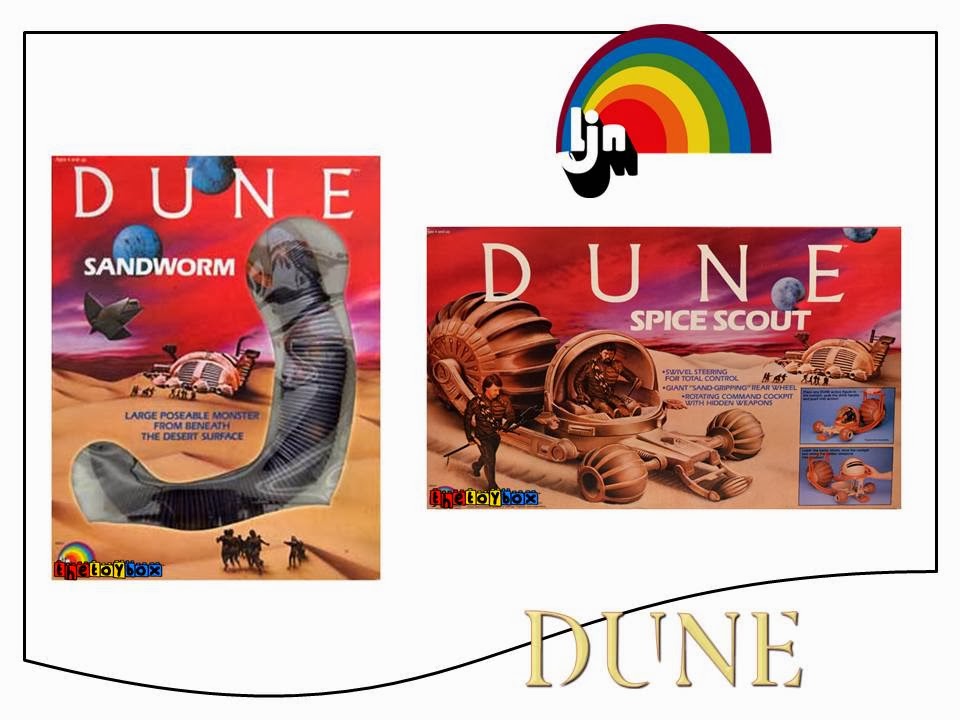 Sandworm*Spice Scout
Whenever LJN got its hands on a particular license, they were notorious for making various sizes of things that while related to the series could never all be incorporated together. The Rough Riders Motorized Sand Scouts were no exception. Even if these small vehicles had hatches or doors to open, which they didn't, there was no way you would be able to fit a figure inside.﻿ 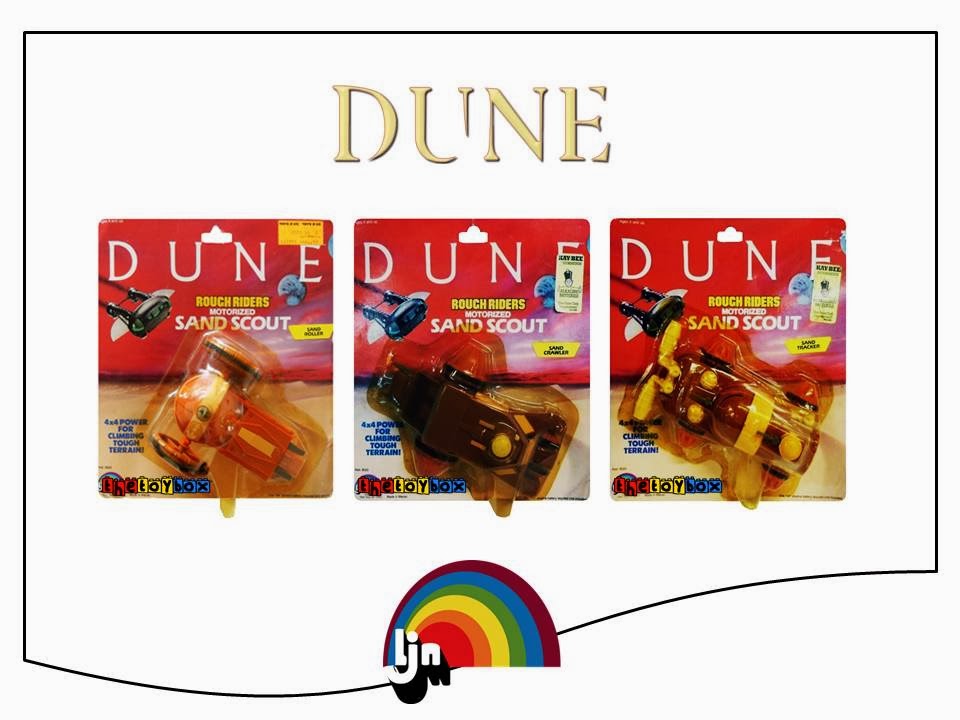 The final items produced for the series were the Fremen Tarpel Gun and Sardaukar Laser Gun . These items were designed to be played with by kids in a cosplay format. 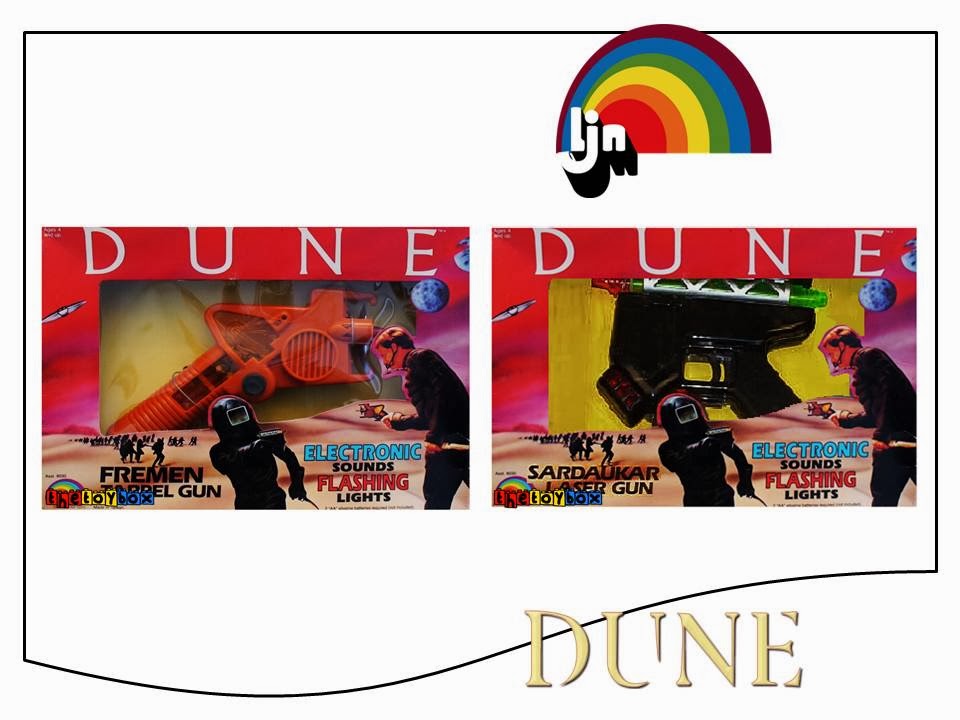 Join us next time when we take a look at vintage Kenner Star Wars Laser Weapons!

Click "HERE" to go back to the home page. For more posts related to this one, please click the labels below.
Posted by The Toy Box on September 15, 2014
Email ThisBlogThis!Share to TwitterShare to FacebookShare to Pinterest
Labels: 1980's, Dune, LJN