Planet Of The Apes (Mego)

As we prepared this post, it dawned on us that the past two posts have both started with the letter "P".  We assure you that this is all coincidence.

When we think of Planet of the Apes, we certainly don't think of how it was a fun film for the entire family.  Rather, we see it more as a mature film series geared towards mature teenagers, and adults.  That's why we were surprised to see such a highly popular, and widely supported toy line from Mego.  Not only was it geared towards kids, but said kids loved them.

The series was so popular that it spawned ten figures, and three years worth of playsets and accessories - Both large and small.  Mego was clearly invested in the line, and capitalized greatly on its success.

We're not sure why, though we speculate it was based on licensing agreements and royalties, but with the first series of figures there was only a generic human known simply as "Astronaut".  Each figure in the series stood at eight inches tall, and featured cloth clothing. 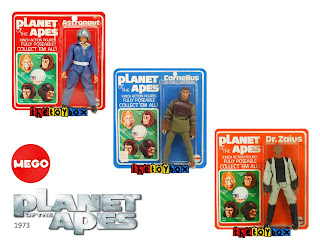 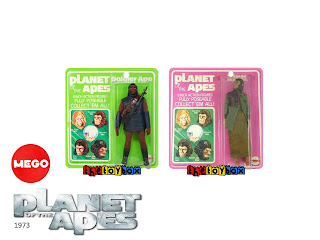 
Big playsets were definitely a major selling point of the series.  The Village playset boasted on the front of the package that it was three feet long, and the Treehouse cut right to the chase and simply stated it was a "Giant Size Headquarters."  The Action Stallion is an interesting piece by means that it was actually a remote controlled toy. 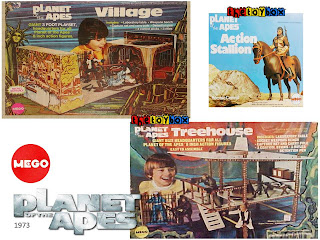 
When series two was released in 1974, figures based on the human characters were finally released.  We mistook these initially for those as seen in the film.  However, reader Matt K. informs us that Alan Verdon and Peter Burke are actually characters as seen in the short lived television series.  In addition, the apes Galen and Urko were also from said television adaptation.  Thanks, Matt! 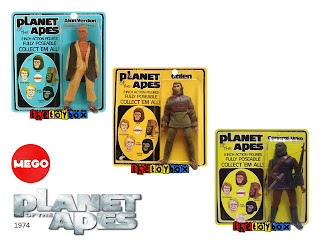 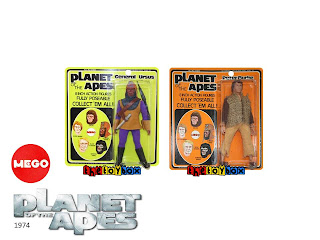 
Mego introduced a "mid range" playset in 1974, but also kept the large ones coming with the massive Fortress. 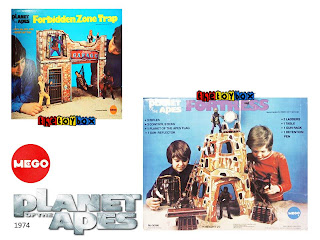 
There were no further figures produced for the line, but Mego still supported it in 1975 with a few more accessories and small playsets. 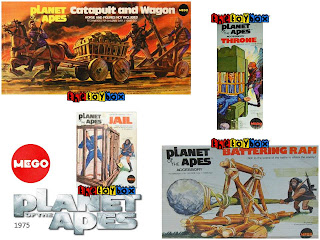 Worth noting is that several of the figures were released in plain cardboard mailers as JC Penny exclusive items in 1975.  They're the same figures from the carded versions but come sealed in a clear plastic bag inside of the mailer box.

A second wave of a few of the series two figures were also produced in window boxes which were released across retail chains.  These boxed versions are a little more difficult to track down than the original carded ones.

Join us next time when we take a look at Mighty Muggs Transformers Universe!


Click "HERE" to go back to the home page. For more posts related to this one, please click the labels below.
Posted by The Toy Box on December 16, 2013
Email ThisBlogThis!Share to TwitterShare to FacebookShare to Pinterest
Labels: 1970's, Mego, Planet of the Apes