Casper was created in 1939 by Seymour Reit and Joe Oriolo.  They initially developed the character with the intentions of producing a series of children's books.  Unfortunately as they shopped the idea around they quickly found there was little interest in the project.

While Reit was away on military service, Oriolo sold the rights of the book to Paramount who not only released several books, but as many of us know also developed the character for numerous comic books, animated shorts, fully animated series, and movies.  Since his first introduction, Casper has garnered waves of loyal fans who will buy anything with his name and/or image on it, and there have been many products to date - Lunchboxes, plush toys, clothing, action figures, and so much more.

In 1997 Trendmasters produced a small line of figures hoping to capitalize on the somewhat success of the feature film which starred a young Christina Ricci, and Bill Pullman.  Much like the film, it reached an audience of loyal Casper fans who jumped at the opportunity to get their hands on new Casper related merchandise.

The first wave of figures produced were the Transforming Disguise ghosts.  Each ghost featured a sound effects button on its chest that could be pressed from outside the package via a hole in the bubble.  These figures were designed to be disguised as everyday workers such as a police man and fire man. 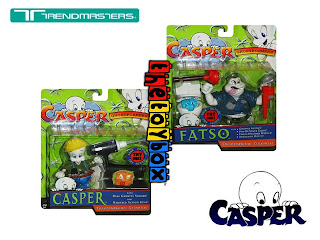 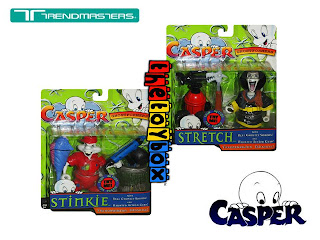 TRANSFORMING DISGUISE
Stinkie*Stretch
The second set of figures were the Hide and Seek Friends.  The figures were much smaller than the Transforming Disguise wave, and included very large accessories.  The premise was that the figure would hide inside of the included accessory and featured a pop out mechanism. 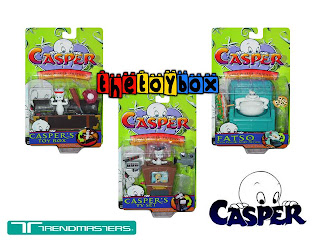 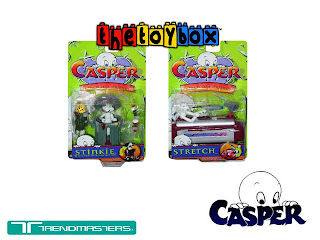 HIDE AND SEEK FRIENDS
Stinkie*Stretch
﻿
﻿
The last item produced by Trendmasters was the Whipstaff Manor Playset.  It seemed like with every different concept the company came up with, the figures got smaller and smaller as the figures included with the Manor were smaller than the above Hide and Seek Friends. 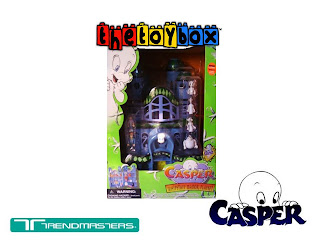 
Join us next time when we take a look at Flash Gordon!


Click "HERE" to go back to the home page. For more posts related to this one, please click the labels below.
Posted by The Toy Box on December 02, 2013
Email ThisBlogThis!Share to TwitterShare to FacebookShare to Pinterest
Labels: 1990's, Casper, Trendmasters