In 1991, The Walt Disney Company launched the highly popular spin off series, Darkwing Duck.  The show featured several characters and reference to its "anchor" show Duck Tales.  The show featured mild manner Drake Mallard, a parody of Kent Allard, AKA The Shadow.  He lives in an unassuming suburban house with his adopted daughter Gosalyn, next door to the bafflingly dim-witted Muddlefoot family. Darkwing struggles to balance his egotistical craving for fame and attention against his desire to be a good father to Gosalyn and help do good in St. Canard. Most episodes put these two aspects of Darkwing's character in direct conflict, though Darkwing's better nature usually prevails.

To coincide with the series, Playmates Toys produced a short lived line of toys.  Though the action figures didn't last nearly as long as the animated series, which ran from 1991 to 1995, today the figures fetch a premium price on secondary markets, and many a collector seeks them out. 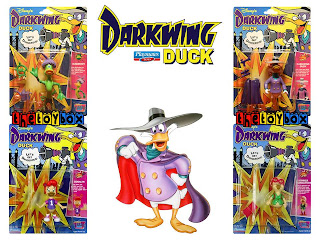 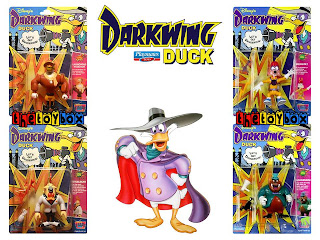 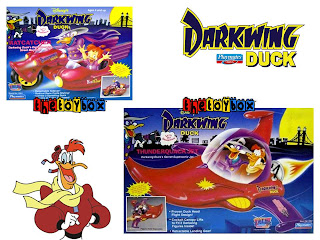 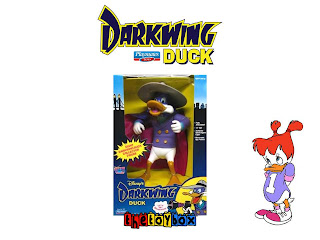 Darkwing Duck
A cosplay "gun" was also produced for the series.
﻿ 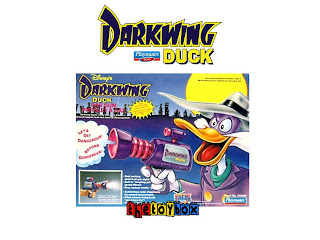 
Join us next time when we take a look at Elvis!


Click "HERE" to go back to the home page. For more posts related to this one, please click the labels below.
Posted by The Toy Box on December 23, 2013
Email ThisBlogThis!Share to TwitterShare to FacebookShare to Pinterest
Labels: 1990's, Darkwing Duck, Disney, Playmates Toys