Toy Biz's Video Game Super Stars - X-Men Vs. Street Fighter is actually one of the larger, if not the largest series in the Video Game Super Stars lineup.  It features two series with a total of ten two packs for a whopping twenty figures - Though some of those are repainted variants.  Still, for fans of both Marvel's X-Men and Capcom's Street Fighter, this series was a treasure chest of toys, and a shame it didn't last a little bit longer to encompass a few more figures such as Guile, Storm, and all the other characters from the game.

The figures complimented the game perfectly, which quickly became a quarter eater in local arcades in 1999.  The video game series would go on to spawn several sequels, and be ported to several consoles year after year, and remains one of the hottest fighting games of this generation. 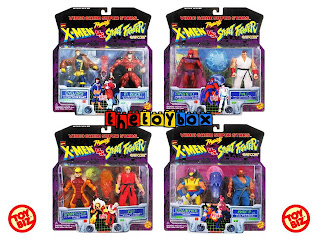 SERIES 1
Cyclops Vs. M. Bison*Magneto  Vs. Ryu
Sabretooth Vs. Ken*Wolverine Vs. Akuma 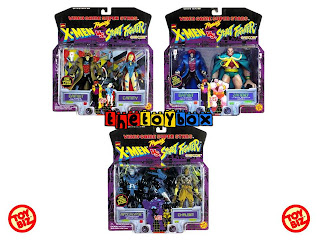 SERIES 2
Gambit Vs. Cammy*Gambit Vs. Zangief
Apocalypse Vs. Dhalsim 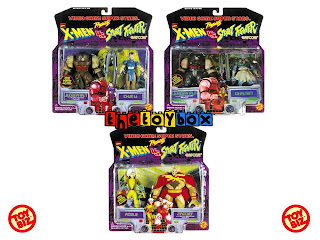 Thank you for joining us for our month long look at some fantastic series from Toy Biz.  Join us November 30th for a special announcement!


Click "HERE" to go back to the home page. For more posts related to this one, please click the labels below.
Posted by The Toy Box on November 28, 2013
Email ThisBlogThis!Share to TwitterShare to FacebookShare to Pinterest
Labels: 1990's, Capcom, Marvel Comics, Street Fighter, Toy Biz, Video Game Super Stars, X-Men, X-Men Vs Street Fighter