If ever there was a Marvel series of toys from Toy Biz that lived up to its name, it was Marvel's Most Wanted.  The characters produced in the line were newer editions to some of the most popular comic books from Marvel at the time, and fans were ravenous to have toys of them.  Though it was disappointing that this line only lasted for three figures, these remain some of the most popular figures in many collector's collections.

The three figures are; Blink from the Age of Apocalypse comic series, Spat and Govel from The Uncanny X-Men number 350, and X-Man, who first appeared in the 1995 series X-Man, and grew even more in popularity with the release of Origin: X-Man in 1997. 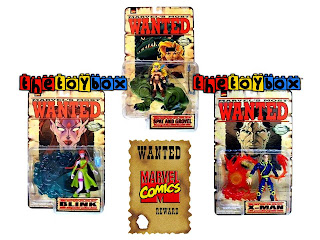 A year after Marvel's Most Wanted, Toy Biz produced the equally small, villain dedicated Marvel Super-Villains Vault series.  The series included the much sought after figures Stegron from the Spider-Man comics, and Typhoid Mary, as well as a highly detailed Ultron.  Much like the Most Wanted series, the only shame with this line was how short lived it was. 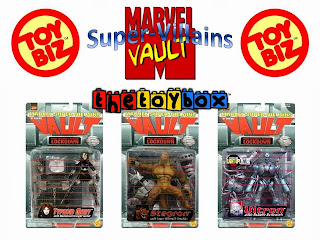 Join us next time when we take a look at Video Game Super Stars - Marvel Vs. Capcom!

Click "HERE" to go back to the home page. For more posts related to this one, please click the labels below.
Posted by The Toy Box on November 21, 2013
Email ThisBlogThis!Share to TwitterShare to FacebookShare to Pinterest
Labels: 1990's, Marvel Super-Villains Vault, Marvel's Most Wanted, Toy Biz