We interrupt our Toy Biz month for a look at this all new wave of TMNT figures coming to a toy store near you now! 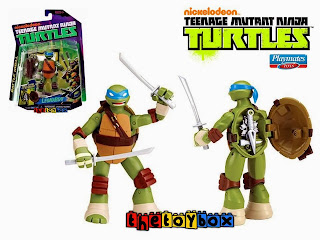 New on shelves is the all new sub series Battle Shell for Playmates hot toy line, Nickelodeon's Teenage Mutant Ninja Turtles.  Right off the bat you're going to notice some huge changes to the figures from the original release of the Turtles from series one.

Each figure is meticulously sculpted to match their cartoon counterpart from head to toe.  However, this does come at the sacrifice of some of the more apparent detail from the original four such as the scales and lines that were sculpted in.  This could be considered a good thing though because it also means that each figure is an entirely brand new sculpt.

The packages sport a banner down the side, much like the prior released Stealth Tech figures which displays the sub series name, Battle Shell.  Flipping the package over reveals a neat little window in the package which displays each figure's open shell with (some of) their gear inside. 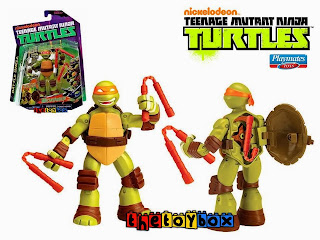 Articulation wise, the figures stand out as some of the best to date.  They have ball jointed heads, ball joints at the shoulders, swivels and bends at the elbows, swiveling wrists, hinge joints on the thighs, and finally, swiveling and bending knees.  With all of that it's really difficult to find any fault with these guys. 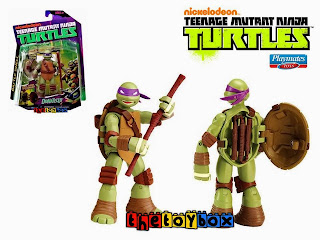 The storage shell itself is on a hinge which opens from left to right.  Much like the larger versions of the Battle Shell figures which were released some time ago, each figure comes with an assortment of weapons that can packed inside.  However, unlike the larger figures which sported chain based weapons, these are all sculpted in one piece, which means constant bending will result in stress marks on the plastic, which of course leads to eventual breaking.

All and all these are great figures to add to your collection, and we dare say are far superior to the first wave versions.  However, much like all the newer released figures they are a bit difficult to find right now, so be ready to put some time into tracking them down.  Especially with the holiday season quickly approaching. 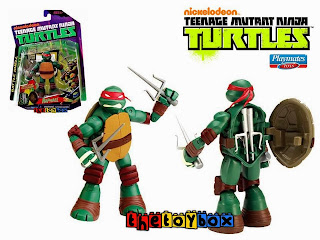 Click "HERE" to go back to the home page. For more posts related to this one, please click the labels below.
Posted by The Toy Box on November 05, 2013
Email ThisBlogThis!Share to TwitterShare to FacebookShare to Pinterest
Labels: 2010's, Nickelodeon, Playmates Toys, Teenage Mutant Ninja Turtles, TMNT