Venom: Planet of the Symbiotes and Venom: Along Came A Spider (Spider-Man) (Toy Biz)

In 1996 Toy Biz created a line of figures based on the highly popular Venom comic book mini series, Planet of the Symbiotes.  The series was geared towards collectors, and featured six inch figures with some really impressive articulation.  Each figure was also designed with an action feature which related to the actions the character portrayed in the mini series.

Though there were only five figures produced, there were several variants which doubled the size of the series.  Each figure with the exception of Scream and Venom had two variants.  Scream had no variants, and Venom had three - One of which remains one of the most difficult figures to obtain to date - The translucent yellow edition. 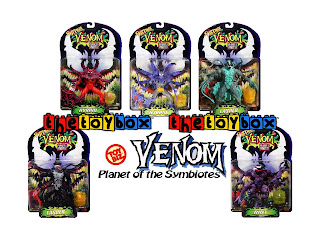 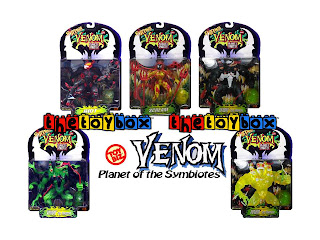 In 1997, a second series of figures based on the mini series Along Came A Spider was produced by Toy Biz.  It featured only four figures, and no variants.  Each figure came packed with a monster that had a leg action mechanic. 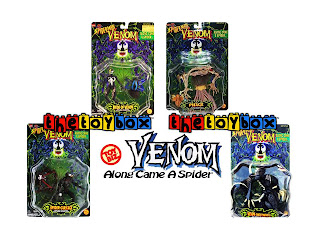 
Join us next time when we take a look at Marvel's Most Wanted and Marvel Super-Villains Vault!

Click "HERE" to go back to the home page. For more posts related to this one, please click the labels below.
Posted by The Toy Box on November 18, 2013
Email ThisBlogThis!Share to TwitterShare to FacebookShare to Pinterest
Labels: 1990's, Along Came A Spider, Planet Of The Symbiotes, Spider-Man, Toy Biz, Venom