Please forgive our short post.  We're taking a little breather from the last two which were quite time consuming.

The Famous Couples line was a set of limited edition two packs which featured popular couples from the current Marvel era of its time.  Though there was certainly room for the series to grow, Toy Biz left it at just the three sets.

The first set featured Cyclops and Jean Grey.  Cyclops was produced using the body of Archangel II, with the head from the Monster Armor Cyclops.  Fun fact - on the back of the figure you can see the open slots where Archangel's wings would normally be attached.  Jean Grey is unique in that it features her in her X-Factor outfit.  The figure was produced by repainting the body of Invisible Woman, and the head of Medusa. 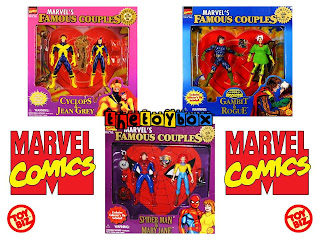 The second set produced featured Gambit and Rogue.  This particular version of Gambit was initially scheduled to be released in the Age of Apocalypse line, but was dropped unexpectedly from production.  With that said, this version is technically an all new sculpt since it was never released until this two pack hit shelves.  Rogue is nothing more than a repaint of White Queen with a cloth shirt added.

The third and last set produced was Spider-Man and Mary Jane.  At this point there have been so many Spider-Man figures produced with the same pose that it's difficult to tell where it actually originated from.  The head is that of the same head used for Peter Parker many times over as well.  This was actually the first time Mary Jane was produced in figure form, and despite being nothing more than a repainted Invisible Woman from series two of the Fantastic Four line, she is done really well so as to garner no complaints - At least not from us.

Join us next time when we take a look at Marvel Hall of Fame!