Marvel Hall of Fame was a series produced by Toy Biz which featured several rereleased figures from their prior lines, most of which were repainted, as well as many new figures based on characters that prior to the series were never made available.  The line was available only online at Puzzlezoo.com, and was a rather successful line lasting seven waves, and featuring thirty-five figures.

Series one was a basic set of figures which feature a repainted Colossus from series one of The Uncanny X-Men line, Daredevil and Invisible Woman from the Marvel Superheroes line, Deadpool from the X-Force series one line, and Rhino from series three of Spider-Man. 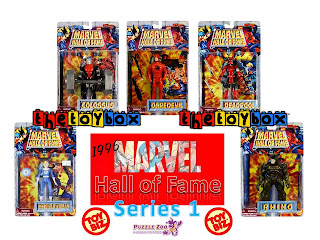 SERIES 1
Colossus*Daredevil*Deadpool
Invisible Woman*Rhino
﻿
Series two was labeled as She-Force, and featured only female characters.  They included; Black Queen, which was a repaint of a White Queen figure to create the new figure, Jean Grey, who was repainted from a Domino figure, Ms. Marvel, who was repainted from a Medusa figure, a repainted Spider-Woman from the Iron Man series two wave, and Storm from the X-Men series one wave with a few more paint details - such as the yellow stripe down the front of her outfit. 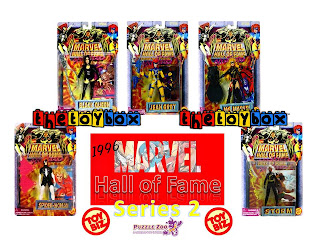 SERIES 2
Black Queen*Jean Grey*Ms. Marvel
Spider Woman*Storm
Series three switched back to the basic line of figures, and included Iceman from series two of The Uncanny X-Men line, another Invisible Woman figure from the first Fantastic Four line, a new Spider-Man, Venom from the Marvel Superheroes line, and Wolverine in his yellow costume with the head of Wolverine from the third series of The Uncanny X-Men. 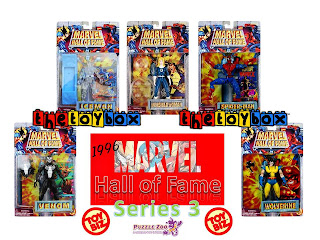 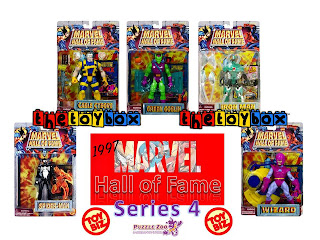 SERIES 4
Cable Cyborg*Green Goblin*Iron Man
Spider-Man*Wizard
Series five was released under the sub title Unmasked, and featured Carnage from the sixth series of Spider-Man, Deadpool, who was the same as Deadpool II from the sixth series of X-Force, Magneto, who was a repaint of the figure released in the Age of Apocalypse line, Venom from series four of the Spider-Man line, and War Machine who would be the same from series four of Iron Man, but now featuring a removable helmet. 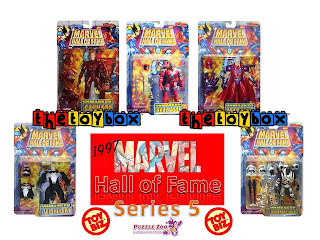 SERIES 5
Carnage*Deadpool*Magneto
Venom*War Machine
Series six reverted back to the She-Force sub series and stayed as such throughout the remainder of the series.  The figures released were; Dazzler, which was an all new figure, Marvel Girl, who was created by repainting a Spider-Woman figure from the Iron Man line, Ms. Marvel who was created by repainting a Phoenix figure, Black Cat from the Spider-Man line, but with a tail added, and the all new Wolfsbane. 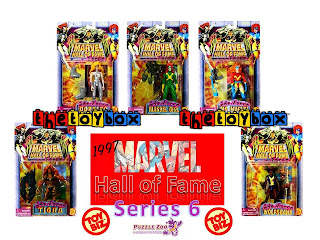 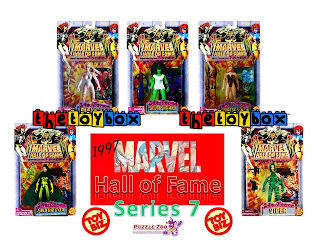 
Join us next time when we take a look at Venom: Planet of the Symbiotes and Along Came A Spider!

Click "HERE" to go back to the home page. For more posts related to this one, please click the labels below.
Posted by The Toy Box on November 14, 2013
Email ThisBlogThis!Share to TwitterShare to FacebookShare to Pinterest
Labels: 1990's, Marvel Comics, Marvel Hall of Fame, Puzzlezoo, Toy Biz