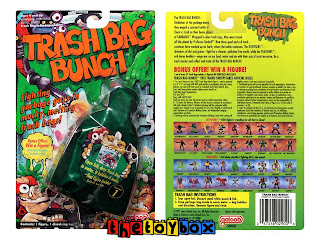 The Trash Bag Bunch was a small line of figures produced and released by Galoob in 1991.  The series took a page from the recent Cheap Toys line produced by Topps, which coincided with their highly popular Garbage Pail Kids license.  Unlike the GPK product, Trash Bag Bunch leaned heavily on "save the environment" marketing, which was quickly becoming a big deal in the early 1990's.  Each figure also came fully painted as opposed to the single colored GPK ones.

Each small figure came packed on a cardboard backer, and inside the plastic bubble was a small trash bag.  The idea was to open the plastic "trash bag", and remove an even smaller paper made bag from inside.  You then soaked said bag in a small bucket, or sink of water, and watch the paper dissolve around it, revealing the figure.  While it is known that said dissolved paper would turn the water green, other people have been quoted as saying they remember the water smelling really bad when the bag completely dissolved.  Whether this was meant to be a marketing ploy to make it seem like the toys literally were coming from garbage bags or just a coincidence is unknown. 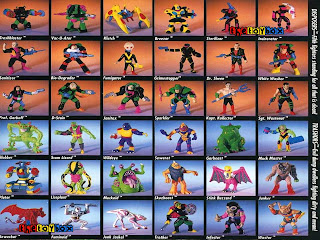 There were thirty-six figures in the first series (complete series shown in the photo to the right), and despite coming in sealed bags, it was easy to tell which figure was inside because each carded character had a small circular sticker at the bottom with a number.  While collecting all consecutive numbers should have yielded a complete set, manufacturing errors did occur, and some got packaged incorrectly.

The figures are broken up into two factions.  The good guys - The Disposers, and the bad guys, The Trashers.  Each faction included eighteen figures in the first series.

Galoob also added a unique twist to the line by packaging two figures in one of every twenty-four packages.  Though the only figures that were packaged inside as the additional figures were numbers thirty-five (Infector), and thirty-six (Wastor).

In 1993, Galoob produced a second series of figures which were sold exclusively in Denmark and Sweden.  This new series consisted of many newly sculpted toys, as well as repainted variant versions of some of the first series.  It was Galoob's hope that the line would take off, and then production would begin for sales in the United States and other countries.  Unfortunately sales didn't merit further production, and the line was cancelled shortly after.  It is because of this that today the second series figures command considerable prices for each individual one.

While there's not much to see packaging wise, we've included a photo of every single numbered and carded figure for the first series below.  The final photo includes a list of the characters with their corresponding number. 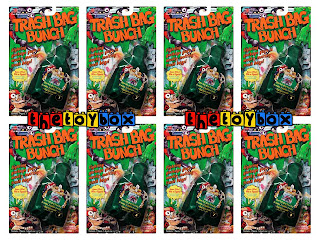 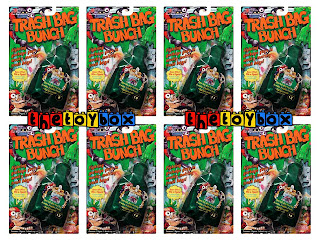 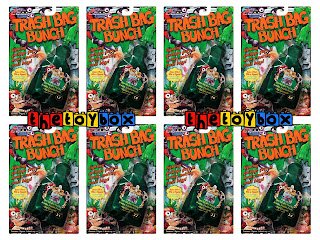 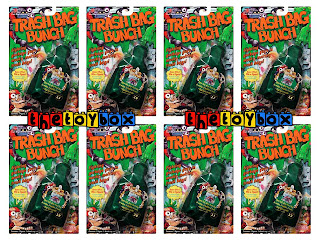 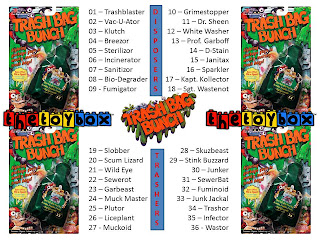 Join us next time when we take a look at Swat Kats!

Click "HERE" to go back to the home page. For more posts related to this one, please click the labels below.
Posted by The Toy Box on October 24, 2013
Email ThisBlogThis!Share to TwitterShare to FacebookShare to Pinterest
Labels: 1990's, Galoob, Garbage Pail Kids, Trash Bag Bunch