When you're a young lad in the 80's, and you step into an arcade to find an all new video game cabinet. When you see that said game has the word "Dragon" in it, you definitely take more notice than you would have at a glance. Then you put your quarter in, and the first thing you see is a group of thugs walking over to a woman. They thrust a fist into her gut, and as she doubles over, they scoop her up and take her away. What just happened?

If you're lucky, several quarters later you'll not only have that answer, but also have your girl back.

Tyco's brand of Double Dragon figures are actually based on the 1993 to 1994 animated series from DiC - Which in turn is loosely based on the 1980's arcade hit. The cartoon was a short lived series, lasting for just twenty-six episodes over two seasons.

The premise of the show had Billy and Jimmy Lee separated from birth. When first meeting, they meet as adversaries, only to find out that they are long lost brothers. The two then unite to face the Shadow Boss. The show is dominated by magical themes - Such as magical swords and masks - Something very different from the actual game. This completely new direction could have been a contributing factor in why many DD fans shunned the show.

However, for those fans, there was a great line of toys produced. Seven figures and three vehicles encompass the whole line - None of which are all that difficult to track down these days. 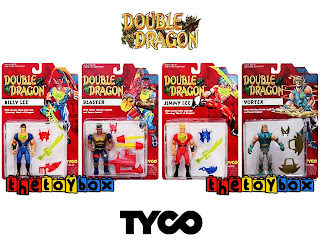 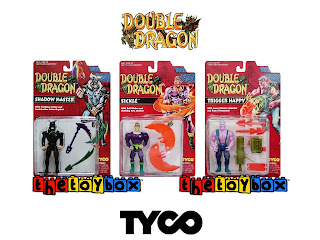 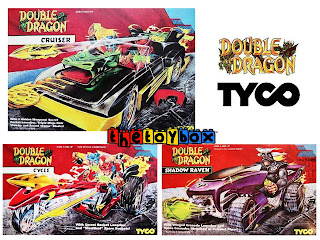 
Join us Friday, November 1st for a special announcement!

Click "HERE" to go back to the home page. For more posts related to this one, please click the labels below.
Posted by The Toy Box on October 31, 2013
Email ThisBlogThis!Share to TwitterShare to FacebookShare to Pinterest
Labels: 1990's, Double Dragon, Nintendo, Tyco