Hot on the heels of series five comes the newest figures for Nickelodeon's Teenage Mutant Ninja Turtles, and this time around it's all bad guys, though sadly there are only two of them.

First up is the all new Shredder.  For those of you who purchased the 2013 San Diego Comic Con version of this figure, you'll notice that with the exception of the lack of chrome finish and additionally painted details, this is the exact same figure.  We talked about the SDCC version in our original Series four post located "HERE". 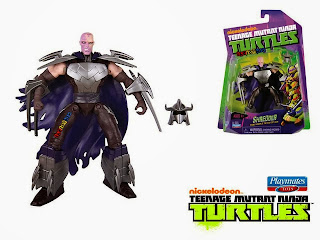 Though he's being dubbed as Shredder #2, you won't actually find the "#2" on the package anywhere.  There are several changes that separate this figure from the original series one version.  First and foremost is that he's sculpted more accurately to the cartoon series.  He also contains a removable helmet which shows his scared face, and he also sports the purple cape he is known for wearing. He's also light years ahead from the original version in the articulation department.

Articulation wise, his head can swivel left and right.  This is slightly limited when the helmet is on.  His arms are on ball joints at the shoulder, and his wrists also swivel.  The legs feature ball joints at the hips, and there are knee joints as well.  The end result is a well put together action figure that you can get a ton of poses out of.

The second, and final figure from series six is the all new mutant Spider Bytze.  What this figure lacks in articulation he makes up for in sheer coolness. 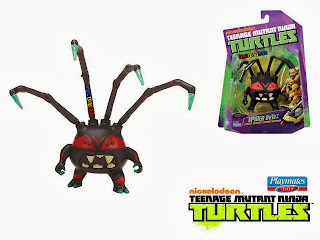 First and foremost, fans will notice that compared to his cartoon counterpart he's incredibly short.  In fact if you removed the limbs on the top of the figure he'd actually be shorter than the Turtle figures.  Much like the reaction to figures such as Dogpound and Snakeweed, this is really disappointing.

Out of the package, Spider Bytez requires a little assembly as none of his spider legs are attached.  Upon popping them in, they actually work as if they are on ball joints, and can swivel in several directions.  There's also a joint towards the center which allows each arm to go up and down.  His arms are also on ball joints which while they don't really help to articulate the figure at least add a little more charm to it.  Beyond that, the figure is pretty stagnant.

However, despite what it lacks in articulation, the Spider Bytes figure is pretty cool.  The paint and sculpt are really awesome, and the attention to detail is pretty amazing.  This figure is well worth adding to your Nickelodeon's Teenage Mutant Ninja Turtles collection.

In addition to these series six figures, the sub series Battle Shell figures are also scheduled to be hitting store shelves soon, so keep your eyes peeled if you're trying to track them down.  All and all, Playmates Toys has really done a good job of keeping new product on the shelves, all while keeping the series interesting for fans young and old.

Click "HERE" to go back to the home page. For more posts related to this one, please click the labels below.
Posted by The Toy Box on October 08, 2013
Email ThisBlogThis!Share to TwitterShare to FacebookShare to Pinterest
Labels: 2010's, Nickelodeon, Playmates Toys, Teenage Mutant Ninja Turtles, TMNT