Disney was in the midst of creating and / or airing some of the most popular animated series of the decade in 90's - DuckTales was slowly coming to an end and in its place launched Darkwing Duck and TaleSpin!

TaleSpin featured the lovable Baloo from Disney's 1967 animated feature The Jungle Book as a pilot for Baloo's Air Service - a cargo company. The company is purchased by Rebecca Cunningham after Baloo defaults on payments, and rather than put him out of a job Rebecca instead enlists him to stay on as a pilot. This leads to a series of adventures high in the sky as Baloo tries to come to terms with no longer being the boss.

The show would often time center on encounters with air pirates lead by Don Karnage. With the aid of Rebecca and his co-pilot Kit Cloudkicker, Baloo would always find a way out of any sticky situation to make his delivery on time - While arguing with Rebecca all the way. Think Moonlighting, but with an airplanes instead of a lawyers office.

Despite its popularity, the series only ran for 65 episodes between 1990 and 1991. It was also during this time that Playmates Toys produced a rather solid line of figures and vehicles based on the show. 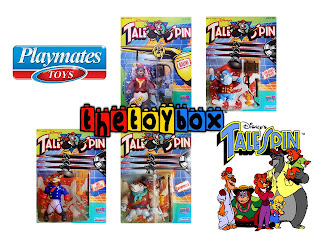 The overall design of the figures was definitely on par with the company's most popular franchise, Teenage Mutant Ninja Turtles, and the quality just as good. Each figure was perfectly represented in plastic with fantastic sculpting and paint. 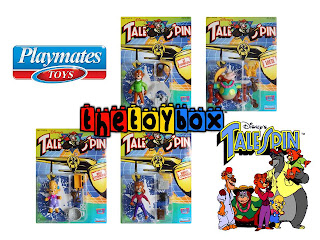 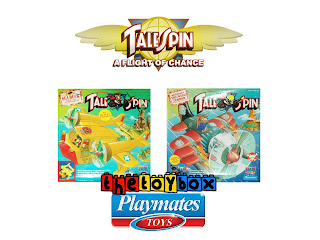 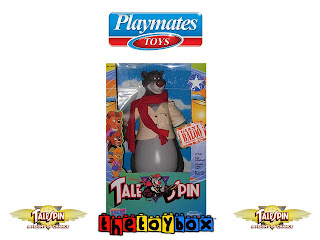 
Join us next time when we take a look at Kill Bill!

Click "HERE" to go back to the home page. For more posts related to this one, please click the labels below.
Posted by The Toy Box on October 14, 2013
Email ThisBlogThis!Share to TwitterShare to FacebookShare to Pinterest
Labels: 1990's, Disney, Playmates Toys, Tale Spin, TaleSpin