Take the premise of Mattel's M.U.S.C.L.E. figures, and smash them together with Hasbro's G.I. Joe, and you get Army Ants. Miniature ant squadrons headed for the battlefield in a blue vs. orange throw down!

Don't let the miniature multicarded figures fool you. These were by no means generic characters - They were by Hasbro after all, the owners of G.I. Joe. Each one had its own identity and rank, and featured a unique set of weapons and accessories. 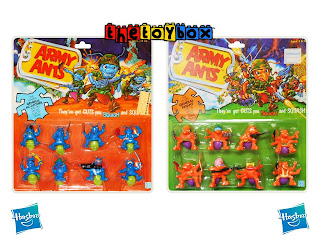 
Despite having zero articulation from being one piece molded figures, each Army Ant had accessories which could be removed or interchanged with other characters. This made for a rather diverse way of play for such a simplistic line. 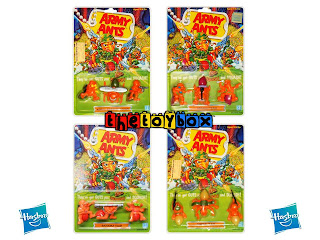 An excellent feature to the series was how each multipack featured different characters. This wasn't a line which forced people to buy the same figures over and over just to get a handful of new ones. 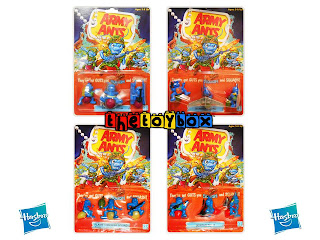 Join us next time when we take a look at Tickle Me Elmo!

Click "HERE" to go back to the home page. For more posts related to this one, please click the labels below.
Posted by The Toy Box on October 07, 2013
Email ThisBlogThis!Share to TwitterShare to FacebookShare to Pinterest
Labels: 1980's, Army Ants, Hasbro