Quentin Tarantino is one of those writer / directors who you either love or hate. His movies are either really deep and meaningful to people, or they're boring and / or violent. At least this is how it is with the people we've talked about it with - Which admittedly isn't many people.

Though it's two parts (part one released in October 2003, and part 2 released in April 2004), Kill Bill is respectively considered to be only one movie - Tarantino's fourth to be exact. It was cut into two parts when the running time exceeded four hours. Studios felt nobody would sit through a film this long. They were proven wrong when the film was released in a limited run in its entirety at select theaters in 2011 entitled Kill Bill: The Whole Bloody Affair - A version many fans wish they could buy on home video.

In 2004 NECA produced a fair amount of figures to coincide with the film's two chapters. Series one featured seven figures, four of which were variations of the Crazy 88. 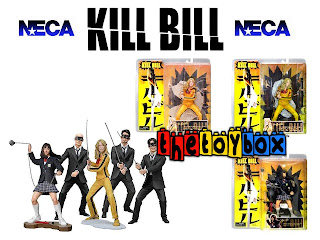 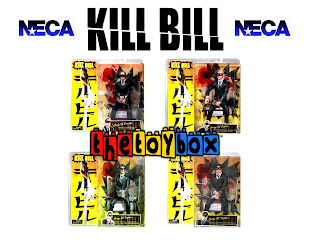 Lucy Liu's character O-Ren Ishii was initially scheduled to be released with series one, but unfortunately was cancelled when the actress would not approve of her likeness being used.﻿ 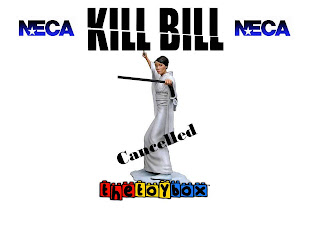 
Series two, or Volume 2 (respectively) focused on the second chapter in the movie. Only four figures made it into the mix plus an additional curved beard variant of Pai Mei. 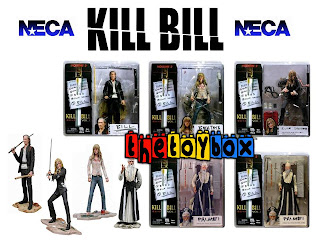 Perhaps it was from mild success of the line, or too many left over unsold figures which lead to NECA releasing a "Best Of" wave of Kill Bill figures. This was nothing more than re-carded figures which had already been released in the prior waves. 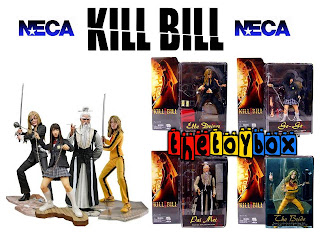 NECA produced a very limited run of the Pussy Wagon truck replica from the film.  The piece was limited to just 2000.﻿ 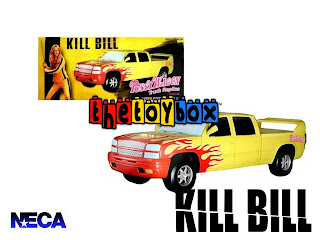 Join us next time when we take a look at Masters of the Universe Mini Comics!

Click "HERE" to go back to the home page. For more posts related to this one, please click the labels below.
Posted by The Toy Box on October 17, 2013
Email ThisBlogThis!Share to TwitterShare to FacebookShare to Pinterest
Labels: 2000's, Kill Bill, NECA, Quentin Tarantino