Swat Kats  - The Radical Squadron was an animated series that ran for two seasons between 1993 and 1994. The premise involved two cats, T-Bone and Razor who were team members of Megacat City's paramilitary law enforcement agency - The Enforcers. Each episode saw the duo go up against threats that were determined to harm the citizens of Megacat City, or the city itself - Villains such as Dark Kat, Pastmaster (the sorcerer), Doctor Viper (the mutant) and the metallic robot gangsters, The Metallikats.

Though slightly popular among fans, the series failed to find a foothold in the regular line up and rotation of other popular Saturday morning cartoons, and as such only had a total of twenty-three episodes, and one special. Though six additional episodes were planned, they were eventually cancelled.

Prior to the animated series being cancelled, Remco produced a small series of figures which included four figures; Razor, T-Bone, Dr. Viper and Dark Kat. Sadly, they never got around to producing any more figures, and more so devastating, never produced the Kat's jet - The Turbokat. This made for a very dull series in the long run. 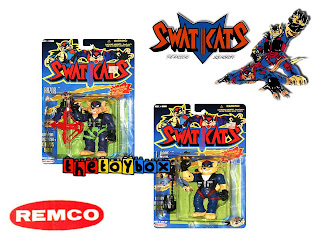 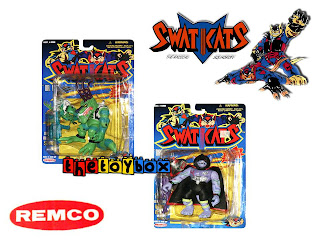 Personally, what kills this line for us is that lack of any vehicles - Specifically the above mentioned Turbokat. You really can't have the figures in their flight gear without it. Had Remco released this, the series would have been far more desirable for us - But, we can understand that sales didn't justify it. However, one has to ask the question - Would sales have been better if the Turbokat was released with the figures?

Join us next time when we take a look at Double Dragon!

Click "HERE" to go back to the home page. For more posts related to this one, please click the labels below.
Posted by The Toy Box on October 28, 2013
Email ThisBlogThis!Share to TwitterShare to FacebookShare to Pinterest
Labels: 1990's, Remco, Swat Kats