Ghost Rider has gone through several character transitions since his first appearance in Marvel Spotlight #5 where he was portrayed as a Western gunslinger - Later changed to the name Phantom Rider. The most familiar iteration of the character is that of stunt driver Johnny Blaze - Thanks in part to the portrayal of the character by Nicholas Cage in 2007 Marvel film. However, with that said, the most common physical rendition of the character in comic books is that based on the Danny Ketch persona.

The series offered a lot of fantastic pieces for Ghost Rider fans, and also broadened the already massive collection of Marvel based toy from Toy Biz during this particular time. Since they were done in the same style and size, they also transition nicely into other series for further play. 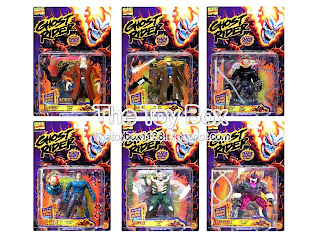 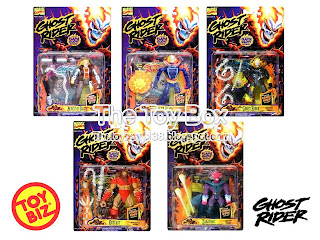 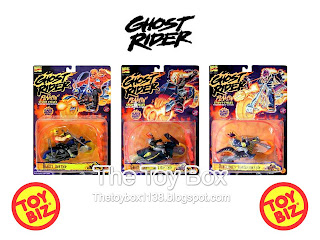 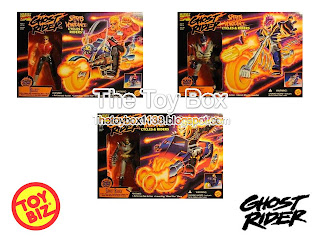 Ghost Rider continues to change periodically both in style and persona. The character enjoyed a brief revival in popularity in 2011 when the Spirit of Vengeance consumed the body of Alejandra. Her character was soon replaced once again with Johnny Blaze.

Since 2014, The Rider inhabits the body of Robbie Reyes, a young Latino who drives a classic muscle car as opposed to the traditional motorcycle.

Join us next time when we take a look at The Walking Dead!

Click "HERE" to go back to the home page. For more posts related to this one, please click the labels below.
Posted by The Toy Box on January 28, 2013
Email ThisBlogThis!Share to TwitterShare to FacebookShare to Pinterest
Labels: 1990's, Ghost Rider, Marvel Comics, Toy Biz