The Simpsons: The Movie (McFarlane Toys)

The Simpsons: The Movie
McFarlane Toys
2007

As fans of The Simpsons television series, it's difficult for us to admit that we didn't particularly care for the movie. It suffered from the same fate that so many animated television series do when being transitioned into a full length film. I.E. It had the exact same story as most of them. Why is it that when a television show is developed into a film that the plot always revolves around saving the town? It's such a tired and overdone concept.

McFarlane's line of toys based on the film is equally disappointing as the majority of them are nothing short of the Simpsons family at the movies as seen in the first five minutes of the film. Each character, though sculpted nicely, is featured sitting in a movie theater chair. Couple that with a naked Bart Simpson deluxe set, and really there is little to desire here.

McFarlane doesn't dud often, but this is clearly a case of how hard a well known company can when they don't seem to bother to try. 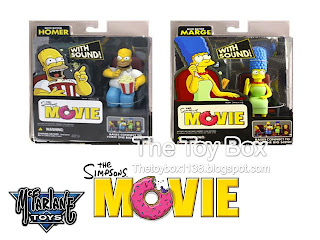 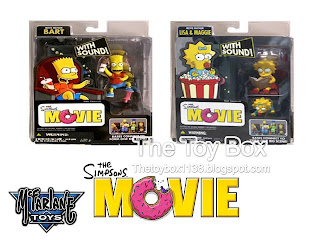 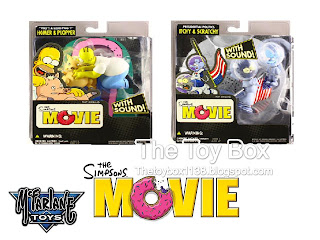 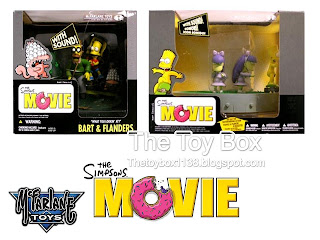 "What You Lookin' At" Bart and Flanders*"Doodle Double Dare" Bart, Sherri and Terri﻿

Join us next time when we take a look at Ghost Rider!

Click "HERE" to go back to the home page. For more posts related to this one, please click the labels below.
Posted by The Toy Box on January 24, 2013
Email ThisBlogThis!Share to TwitterShare to FacebookShare to Pinterest
Labels: 2000's, Matt Groening, McFarlane Toys, The Simpsons, The Simpsons the Movie