Flash Gordon: The Greatest Adventure of All (Mattel)

Flash Gordon: The Greatest Adventure of All
Mattel
1982

With the somewhat success of the latest live action adventure of Flash Gordon in 1980 (which featured a fairly decent Queen soundtrack), Filmation struck out to produce a newly animated movie - Flash Gordon: The Greatest Adventure of All.  The ninety-five minute film took a much darker approach to the character than the prior film, and rather then be portrayed as a football player (as he was in the live action film), he was now on a mission during the prime of World War II.

To help bolster the film, Mattel produced a series of action figures and vehicles.  The characters were sculpted with very limited articulation, much like that of the current Star Wars action figures, and in total the line encompassed eight figures. 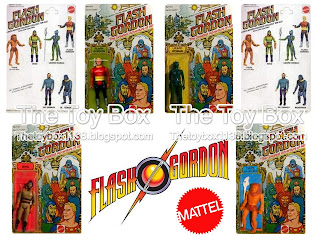 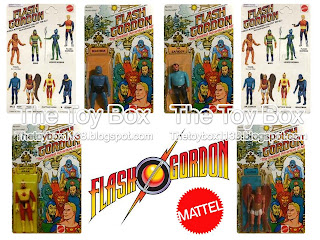 Beastman*Dr. Zarkov*Captain Arak*Vultan
With poor sales hindering the line﻿, Mattel began packaging the figures into two sets of four in an effort to offload them all. 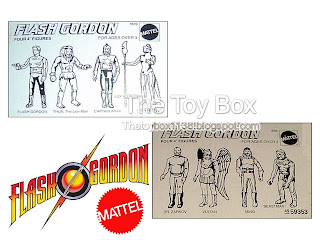 Four Pack Number 1 - Flash Gordon*Thun the Lion Man*Captain Arak*Lizard Woman
Four Pack Number 2 - Dr. Zarkov*Vultan*Ming*Beastman
The Rocket Ship is an interesting vehicle by way that it's nothing more than a giant plastic blow up, much like the soon to come Turtle Blimp from Playmates Toys Teenage Mutant Ninja Turtles line.  Sitting on top of it was a shaped plastic piece which held the cockpit.
If the line didn't feel cheap enough, Mattel also released a second vehicle - Ming's Space Shuttle.﻿  This shuttle was the exact same piece of plastic used to create the cockpit of the larger Rocket Ship, only instead of yellow, it was green. 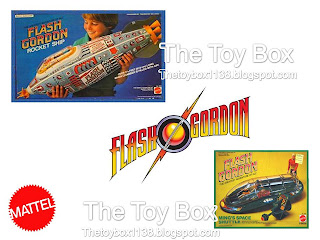 Flash Gordon: The Greatest Adventure of All is one of those lines where even when we were children in the 80's we shook our heads and asked, "If you're not going to try, Mattel, why bother?"

Join us next time when we take a look at Earthworm Jim!

Click "HERE" to go back to the home page. For more posts related to this one, please click the labels below.
Posted by The Toy Box on January 03, 2013
Email ThisBlogThis!Share to TwitterShare to FacebookShare to Pinterest
Labels: 1970's, Alex Raymond, Flash Gordon, King Features, Mattel, Queen, The Greatest Adventure of All, The New Adventures of