When id Software announced that it would be releasing a new first person shooter in 1996, fans immediately went nuts with excitement. Doom 2, which was released in 1995, was a critically acclaimed hit of first person shooter games. As such, fans could only imagine how id could possibly top itself. Despite raising the bar so high for themselves, the software developer not only appeased fan expectation, they far exceeded them. To date the game is considered a masterpiece in every aspect.

When the sequel was announced, fans couldn't wait to get their hands on the game. Despite being a follow up to the original title, Quake II is only a sequel in name. The scenario, enemies and themes have no continuity from the first game. None of this hindered its popularity, and the game quickly became the most online played title of 1998.

ReSaurus sought to capitalize on the popularity of the title, and released five figures based on the characters from the game. Unfortunately sales didn't reach those of the game itself. In fact, they didn't even come close. The series was discontinued just as fast as it hit store shelves. 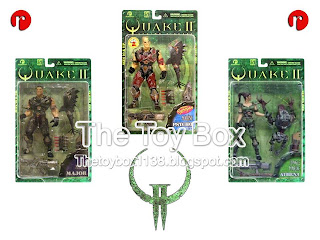 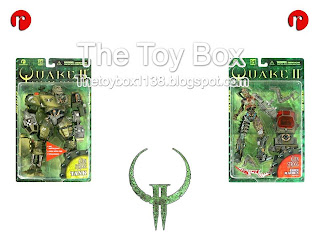 Alien Strogg Tank*Alien Strogg Iron Maiden
ReSaurus struggled for the next few years, releasing mostly video game based action figures, but never was able to develop anything that would help the company break into mainstream action figure production. The company hasn't been heard from since 2001 when it released its final toy line to date base on the comic book character, Bone.

Join us next time when we take a look at Underworld!

Click "HERE" to go back to the home page. For more posts related to this one, please click the labels below.
Posted by The Toy Box on January 10, 2013
Email ThisBlogThis!Share to TwitterShare to FacebookShare to Pinterest
Labels: 1990's, ID Software, Quake, Quake II, ReSaurus, Video Game Toys