Vampires vs. werewolves. It's a classic fight that's been iterated in media of all kinds for decades. Is it an overdone concept? Maybe. Are some versions better than others? Definitely.

For some fans, the Underworld series not only does it right, but does it over and over without fail. The series as a whole has more than doubled its combined budgets of $177,000,000.00 with over $450,000,000.00 in worldwide revenue. In short, someone out there likes the series.

While people may like the films, those fans don't seem to transfer over to the world of action figures. This was apparent in 2003 when Mezco produced the incredibly small line of action figures based on the first film. Before people even realized the line was available stores were shoveling massive amounts of unsold stock to clearance isles in a desperate attempt to get rid of them. 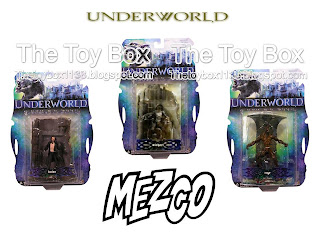 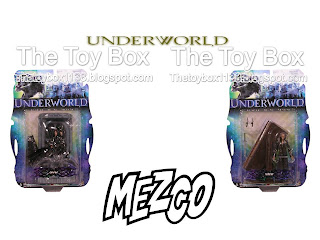 Join us next time when we take a look at South Park!

Click "HERE" to go back to the home page. For more posts related to this one, please click the labels below.
Posted by The Toy Box on January 14, 2013
Email ThisBlogThis!Share to TwitterShare to FacebookShare to Pinterest
Labels: 2000's, Kate Beckinsale, Mezco, Underworld