Bill and Ted's Excellent Adventure was a movie that came out of nowhere in the 80's, and became a cult classic with a not so excellent sequel. The film starred Alex Winter as Bill S. Preston, Esquire, and Keanu Reeves as as Ted Theodore Logan - AKA, Wyld Stallyns!

The figures from Kenner in 1991 aren't based on the actual film, but rather the 1990 spin-off animated series which ran for twenty-one episodes. The first season of the show is notable for the actors from the film returning to the roles for the voice overs - Something highly uncommon in the cartoon world, but definitely appreciated by fans. When the show went into production for a second season, the actors voicing the characters were changed to those of the actors who would also be portraying them in an upcoming live action spin-off the same name.

The series is relatively small for such a notable company such as Kenner, and the lack of playsets or vehicles (with the exception of the phone booth) definitely doesn't help. However, it's not a bad bunch of toys, and fans of the movie will definitely appreciate being able to own these characters - Especially considering that no toy company has revisited the concept to date. 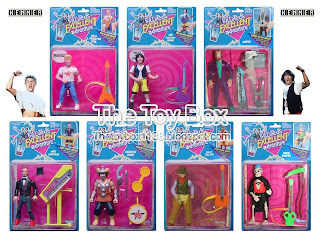 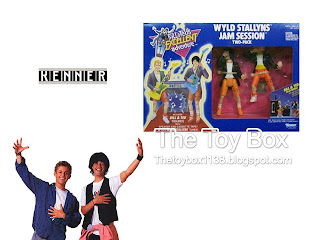 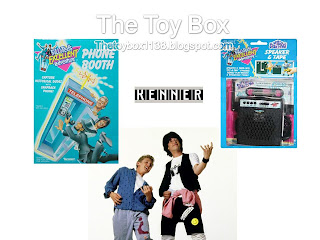 As many fans of the of the films know, a third film has been in talks/development for numerous years now. Obviously it's hard to say if the film will ever make it into production, let alone be released.

Join us next time when we take a look at The Simpsons: The Movie!

Click "HERE" to go back to the home page. For more posts related to this one, please click the labels below.
Posted by The Toy Box on January 21, 2013
Email ThisBlogThis!Share to TwitterShare to FacebookShare to Pinterest
Labels: 1990's, Alex Winter, Bill, Bill and Ted's Excellent Adventure, Keanu Reeves, Kenner, Ted