People like to look back on Batman Forever, and think how badly it flopped. However, the reality of this is that their perspective may simply be skewed by the damage that Batman & Robin did. The truth of the matter about the film is that it took in three hundred thirty-six million dollars at the box office on a one hundred million dollar budget. No, it wasn't the Tim Burton sequel that fans may have wanted, but the campy look and feel was the return to the lighthearted Batman franchise that Warner Bros., McDonald's, and parent activist groups were looking for.

Many know the story already. How when Tim Burton sat down to discuss his third installment that Warner Bros. did everything they could to talk him out of it. He was a smart director, and he saw the writing on the wall in that meeting. He knew very well what they were trying to make clear. The studio didn't want him to do another Batman movie. Warner Bros. had received major backlash from McDonald's resulting from outraged parents who panned the family friendly restaurant for promoting a kids based Happy Meal on a film they deemed too dark, violent and scary for children. That film, of course, was Burton's 1992 Batman Returns.

Though it wasn't immediate, with the exit of Tim Burton, Warner Bros. also lost their star, Michael Keaton. However, this didn't sway them. Batman forever had the likes of Val Kilmer, Nicole Kidman, Tommy Lee Jones, Chris O'Donnell, and up and comer comedic genius, Jim Carrey. All engines were full speed ahead. Under the guise of Joel Schumacher, Warner Bros. presented a family friendly Batman film that left critics raving, and families happy. For all intents and purposes, the film was successful. So successful that Batman & Robin was rushed into production.

It was with the fourth installment flopping that in retrospect people started to look back on the third film through hazy glasses. What was once deemed a great movie that Jim Carrey stole the show from, was now seen as a blemish. The beginning of the end. That movie where Joel Schumacher ruined the Batman franchise by taking the reigns from Tim Burton. Since then, it honestly hasn't gotten a fair shake among critics. People want to hate it because it's not Tim Burton and Michael Keaton. Yet at the time, the box office shows they loved it. 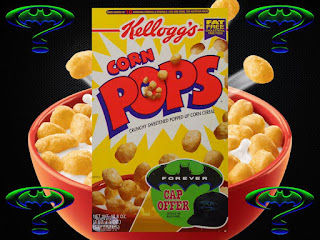 With its success not only came more Happy Meal toys, but also a tie in promotion with cereal giants, Kellogg's, who offered a black, all cotton adjustable baseball cap featuring the film's question mark logo in green and blue. Sadly, this was no different than the very same cap that was already available in most clothing and retail shops. Because I wasn't, and still am not, a baseball hat wearer, I don't know if the $4.99 price for the cap through Kellogg's was a deal or not.

Though the baseball cap would remain available throughout the promotion, Kellogg's would follow this release of Corn Pops with all new boxes which featured the two heroes, Batman and Robin, as well as the two villains, Two-Face and Riddler. In overseas markets, they also offered a "special edition" double size box, which featured the film's iteration of the Batmobile on the box. This particular package also included a promotion for film related tattoos. Unfortunately, I wasn't able to get my hands on the foreign box, but here are samples of the four character boxes. 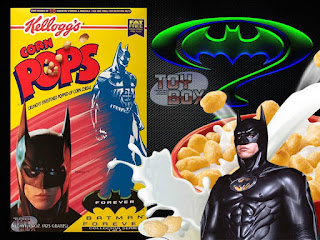 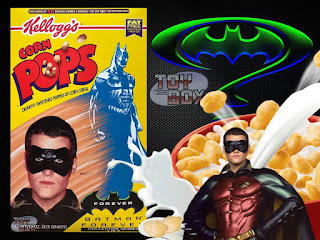 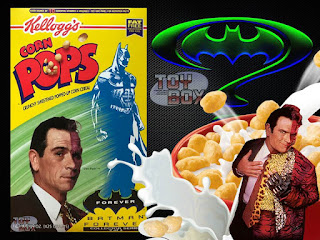 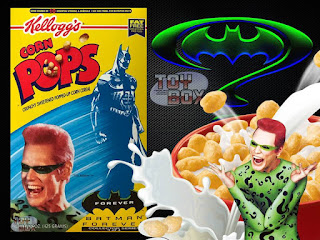 Despite which box you purchased, they all had the same backing on the box for the hat promotion. If you flip the box on its side, you can also read short blurbs about each character, as well as the actor's name who plays them. 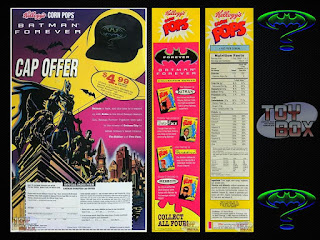 And to wrap this post up, here is an image of the actual hat. 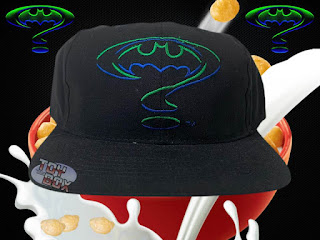 It's a shame that time hasn't been more friendly to the film. People's opinions changed fast when Batman & Robin crashed and burned so hard. We are after all talking about a film so bad that both Schumacher and Clooney have apologized for making it. But in retrospect, that doesn't make Forever a bad film by default. No, much like Superman III, it's a decent sequel, it's just not the sequel we expected based on the groundwork of the first two films. I think we can all agree that the fourth installment for Batman (and Superman for that matter) was disastrous.