My first Duran Duran Retro Spin was all the way back at the beginning of their career with the 1981 self titled album. For my follow up experience with them, I thought I'd go all the way to the end of the decade with their last entry in the 80's, Big Thing (1988).

By 1986, the lineup of Duran Duran had dwindled down from the original Fab Five to the trio of Simon Le Bon, Nick Rhodes and John Taylor. Despite the group still producing a fair amount of hits, the lack of members Andy Taylor and Roger Taylor was noticeable to many fans. The music was just...different. Synthpop had taken over, and it really wasn't for the better. 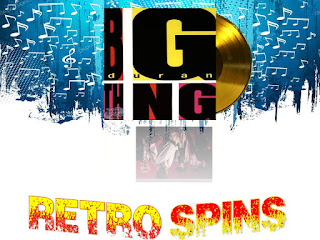 Despite this, Big Thing does manage to have two tracks on it which I would say are "required listening" for a greatest hits compilation. Those songs are, I Don't Want Your Love, and All She Wants Is.

Other than that, there's very little to get excited about. It's not a bad album, it just doesn't have the life in it that prior Duran Duran albums had. It's as if the band itself is bored with their own material.

Big Thing isn't a "bad" album. Far from it. It's just disappointing. I honestly expected more from a group that's sold millions of albums across the world. For such a high profile status in the music industry, Duran Duran's albums shouldn't just be "okay". Am I wrong in feeling this way?

Click "HERE" to go back to the home page. For more posts related to this one, please click the labels below.
Posted by The Toy Box on February 22, 2022
Email ThisBlogThis!Share to TwitterShare to FacebookShare to Pinterest
Labels: 1988, 80's Album Review, 80's Music, 80's Music Review, Big Thing, Duran Duran, Music of the 80's, Retro Spins