Jam On Revenge, the first album from Newcleus, was an album I really enjoyed. Mainly because it was so different from what I was accustomed to listening to. However, even with that said, I didn't nab more than one song from the record.

Still, hearing it got me pretty excited to hear their follow up album, Space Is The Place. I had picked up the two albums at the same time, but because I was listening to other stuff, I didn't get around to it right away.

With this year's theme being all about before and after albums, I thought it was an appropriate time to swing back around to them. 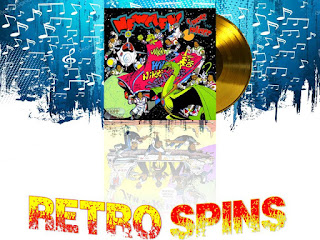 Space Is The Place is on par with Jam On Revenge. It's enjoyable, but at the same time, it also doesn't produce singles. It's one of those albums which are best enjoyed from start to finish because each song fits into its intended place. Unlike JoR, the tracks are not intertwined with sound effects, which does make it easier to know when a new track is starting.

I did end up grabbing one song off of the album for my shuffle. Track five, Cyborg Dance. Again, it's not that the other songs were bad. This one just stood out the most for me.

Track six, I Wanna Be A B-Boy, did get me a little nostalgic excited around the four minute thirty second mark because I heard the distinctive scratching of Herbie Hancock's Rock It. Coincidence? I'm not sure. But I enjoyed it immensely.

Overall, it was a good album, but it's not one I'm going to be listening to often. Mainly because I have so much music I'm trying to get through, and I really don't have time to re-listen to full albums - With the exception of the best of the best which have been ingrained in my head since the 80's. Still, I can see myself getting back around to this one, and Jam On Revenge, some day.

Click "HERE" to go back to the home page. For more posts related to this one, please click the labels below.
Posted by The Toy Box on January 25, 2022
Email ThisBlogThis!Share to TwitterShare to FacebookShare to Pinterest
Labels: 1985, 80's Album Review, 80's Music, 80's Music Review, Music of the 80's, Newcleus, Retro Spins, Space Is The Place