Falco is one of those singers I really wish would have done better in the 80's than he did. He struck American shores hard with his hits Rock Me Amadeus and Vienna Calling, but then sadly couldn't recreated that success with any of his follow up albums. Even for me, his tunes are pretty hit or miss. I find they're either really good, or just bad.

Today, I'm taking a look at his 1988 album Wiener Blut, or Viennese Blood, as it translates to in English from German. At least I hope it's German, and not Dutch, because then it would translate to wiener broke.

Wiener Blut didn't produce any hits for the signer, and as a result he unfortunately continued to struggle with waning popularity, declining sales and as a result, personal issues. Falco wanted so badly to recreate the lightning in a bottle he found with Falco 3, but sadly never could. 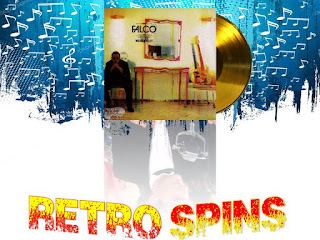 Admittedly, and I'm sorry to say this, the album really isn't that good. In my listening session, I pulled three tracks for my shuffle. Whoever, with eleven songs in total, that's a pretty bad ratio of good to bad. Now, with that said, the three songs I did enjoy, I really enjoyed. They're up there with some of my favorites from "3" (the album). Those were, Wiener Blut, Untouchable and Garbo.

Hearing the record also made me want to dig a little deeper into the singer's past albums to see if those would be worth picking up too. Unfortunately, after a quick peruse on Youtube to see what I'd be getting myself into, I didn't hear anything that I enjoyed. As such, I passed.

You just kind of have to take it for what it is. Falco had his fifteen minutes of fame, which is more than most of us get, so you really just have to enjoy it for what it was. It would have been great if Falco was a break out artist who produced hit after hit, but he didn't. What more can you really say?

Click "HERE" to go back to the home page. For more posts related to this one, please click the labels below.
Posted by The Toy Box on January 18, 2022
Email ThisBlogThis!Share to TwitterShare to FacebookShare to Pinterest
Labels: 1988, 80's Album Review, 80's Music, 80's Music Review, Falco, Music of the 80's, Retro Spins, Wiener Blut
Newer Post Older Post Home