I had to move some posts around from last year's schedule in order to fit in my ten posts related to cartoons of the 80's. As a result, I have several posts which got shifted into 2022, and those are going to be coming at you for the next several weeks. So for now, back to the old format.

They'll never do this again.

The 90's were an exciting time for comic books. The industry was at an all time high, talent was surpassing the actual books they were working on, and prices were skyrocketing on issues that just hit store shelves the week prior. Variant covers, gimmick covers, mini-series, crossover events, a newly founded independent label and more were turning the industry upside down, and fans across the world were all enjoying the ride.

Between 1992 and 1995, Marvel released a series of swimsuit issues that featured some of its most popular characters of the era. There's no doubt in my mind that the publisher was aiming for a more mature audience with these over the top provocative issues. Naturally, as a fifteen year old boy, I was all over the 1991 and 1992 magazine size issues when they first came out. 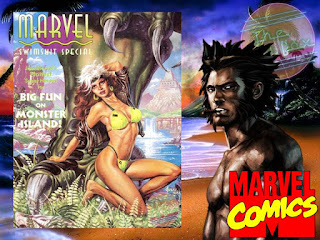 With the current direction of Marvel Comics, I can't help but think that something like this would be completely frowned upon. It's just not socially acceptable to objectify women like this anymore - Or so I hear. Additionally, from what I've been seeing from the "talent" in recent history, they use their books to fulfill political agendas, as well as to protest and publish activism. So something like this would be out of the question. 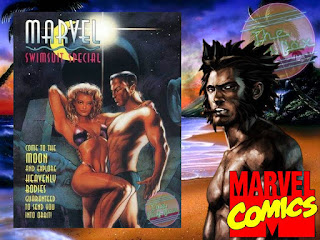 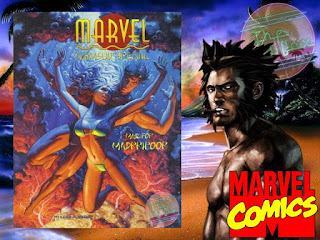 Though it's obviously in line with the above, and some collector's consider it to actually be the first issue, Marvel initially released a swimsuit issue in 1991 entitled, Marvel Illustrated: The Swimsuit Issue. 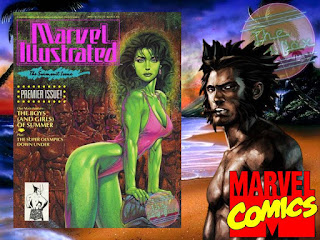 Time line wise, it would make sense that this was the first issue, making 1992 - 1995 issues two through five.

Basically, what you get from any of these magazines are pinups of some of your favorite Marvel characters, guys and girls, clad as skimpy as possible, and drawn by some of the hottest artists of the era. What's not to love?