This Is Spinal Tap (Sideshow Toy)

This Is Spinal Tap
Sideshow Toy
2000 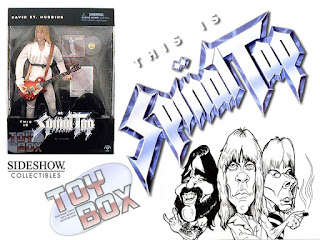 My introduction to the band was actually in 1991 when they took the stage at the Freddie Mercury Tribute Concert to entice the crowd with their song, Majesty of Rock. Loved it and immediately tracked down the album, Break Like the Wind which it's featured on - The only album of theirs I have...Well, until I wrote that sentence and immediately went to ebay to buy, "This is Spinal Tap". What can I say, I'm a sucker for impulse buying. 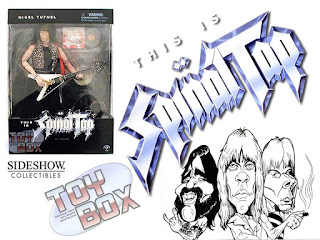 For the longest time, and much like The Monkees, I thought the band was legit. It never even crossed my mind they were a fictional band created as a parody and then grew into something larger - Or a legit band, if you will. Granted, Spinal Tap by no means saw the popularity The Monkees experienced.

If you haven't actually seen the movie, "This is Spinal Tap", I highly recommend you do. While its script is rather generic, it has a ton of hysterical moments. My personal favorite being when the band is setting up / rehearsing for a show and they're shown the cover for their fictional album, "Smell the Glove", for the first time. All black. No label, no songs, no picture. Just black. Ridiculous in a way because both Prince and Metallica would go forward and do the same thing with future albums. Spinal Tap can shout, "FIRST!" as this would also become the cover for the film's soundtrack / first studio album. 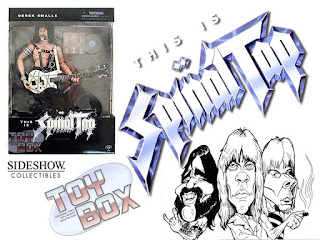 Of course back in 1984 when the film was produced there was no market for action figures, nor any toy producers who would have probably even considered making figures based on the characters. That's kind of why it's such a great time in action figures and has been for the past two decades. Cult classic characters have seen an abundance of releases thanks to companies such as NECA, McFarlane Toys, Mezco and of course Sideshow Toy who released these particular figures.

Each twelve inch figure comes with the character's signature guitar as well as a really nice display stand shaped like a guitar pick which features the character's name. Additionally, each figure also comes with a cardboard Spinal Tap album cover and record. Nigel features the album Shark Sandwich, David comes with Intravenus de Milo and Derek comes with a promotional album which states it's not for sale. There are also a handful of other accessories included, such as a cucumber (Derek), amp volume dial (Nigel) and sketches / drawings (David). If you watch the movie, you'll quickly discover all of these accessories make sense.

If you're in to the all in one purchasing option, Sideshow Toy produced a three pack which is actually really nice. It looks like a guitar (or keyboard) case and features a fantastic window box view of the band. 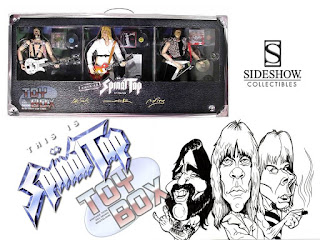 The great thing about these figures is that if you missed them in 2000 when they were first released, they're not going to break your bank. I've seen the three pack, never opened, sell for as little as $8.50. Individual figures have sold for as little as ninety-nine cents. Of course, nabbing them at these low prices is going to take a bit of patience as several sellers list them rather high and I've seen them sell for $60.00 to $150.00 too. The best thing to do is arm yourself with information on the line. You don't have to pay high prices to get them, so don't.

Click "HERE" to go back to the home page. For more posts related to this one, please click the labels below.
Posted by The Toy Box on April 08, 2019
Email ThisBlogThis!Share to TwitterShare to FacebookShare to Pinterest
Labels: 2000's, Sideshow Collectibles, Sideshow Toy, Spinal Tap, This Is Spinal Tap
Newer Post Older Post Home