I don't know how I feel about supergroups. Part of me wants to say its a comfortable cash grab for entertainers who don't want to try to hard and / or are afraid of failure. So they surround themselves with other big names in an attempt to push sales based solely on name and not necessarily hits.

Fortunately, this wasn't a problem for The Power Station. Not only did they have the names backing them, but also the hits - Even if one of them wasn't technically of their own composition. I'll forgive them for that. 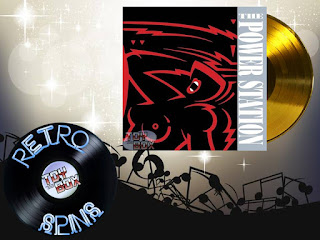 The band was fronted by Robert Palmer, and featured Andy and John Taylor of Duran Duran on lead guitar and bass with drums by Tony Thompson of Chic. Like I said above - Supergroup. The self titled debut would be the one and only album released by the four members.

While a follow up album was in the works in the 90's, bassist John Taylor withdrew from the project prior to recording sessions taking place due to what were noted as personal problems. Sadly no full reunions have occurred to date, and obviously with the death of Robert Palmer and Tony Thompson there won't be one.

However, fans can still take the opportunity to enjoy the 1985 album in all it's delicious glory. Well, not delicious...Hmm...suitable is maybe the better choice word. It's honestly just okay. For me personally there wasn't all that much which stood out here. I of course like the hits Some Like it Hot and Bang A Gong. Beyond that though, only one other track stood out for me - Communication. Mind you, it wasn't so much the song as a whole, but rather the bass riff of the song which hooked me.

The remainder of the album is fine. It's a good listen overall. Unfortunately it's just one of those things were the hits are hits for a reason. The rest is just okay.

Click "HERE" to go back to the home page. For more posts related to this one, please click the labels below.
Posted by The Toy Box on April 16, 2019
Email ThisBlogThis!Share to TwitterShare to FacebookShare to Pinterest
Labels: 1985, 80's Album Review, 80's Music, 80's Music Review, Music of the 80's, Retro Spins, The Power Station