I really had to brace myself for this one because when I first tried to sit through this album I had to cut it off midway through the first track. I wasn't too prepared for what I was in for and it wasn't working for me. After a little research on the album and mental preparedness I took deep breaths and dove in.

First, it's important to understand the album. Taco's intentions were to take classic theatrical and Broadway hits of yesterday and develop them for the 80's pop scene. He certainly did just that and while the album hits these marks it fails to really attract attention for being anything original. Most of us have heard these songs before Taco's renderings, so we've already made a determination if we like them or not. 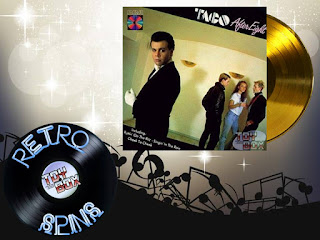 Taco fits the bill behind these songs. He sounds straight out of the era these songs came from (vocally) and quite honestly some of these tracks would fit well in an environment such as 2K's Bioshock or even Sega's Condemned: Criminal Origins. Unfortunately, when you're faced with just listening to the album it's not so good. Perhaps I would enjoy these tracks more if I had a greater appreciation for Broadway, but I don't.

On a side note, I love how the cover even suggests the concept of, "This guy isn't going to fit in here." Taco knew he was about to present something very different to the world and though it wasn't necessarily my favorite album, kudos to him for doing what he loves and finding a niche audience in the process. That was part of the beauty of the 80's. Everyone could do (pretty much) their own thing and nobody (or at least most didn't) judged too harshly.

I personally bought the album for the hit, "Puttin' on the Ritz" which is the only song from Taco most people even remotely remember. The song was by no means an instant success. It took almost a full year for it to debut on the charts. However, once it did it moved fairly quickly towards the top and eventually peaked at number four for two consecutive weeks in September of 1983. Unfortunately, it quickly dropped off from there and became the only hit for Taco.

After listening to the album I think it's safe to say I can (sparsely) stick with that one and only track for my 80's listening shuffle. I didn't necessarily cringe like I did with my first attempt at listening to it, but I didn't come away with anything else either. It's just not my cup of tea.

If it's yours, then you're definitely going to want to grab this one sooner than later. It's becoming more and more scarce on CD and prices are rising rapidly.

Click "HERE" to go back to the home page. For more posts related to this one, please click the labels below.
Posted by The Toy Box on April 02, 2019
Email ThisBlogThis!Share to TwitterShare to FacebookShare to Pinterest
Labels: 1982, 80's Album Review, 80's Music, 80's Music Review, After Eight, Music of the 80's, Retro Spins, Taco