M*A*S*H* (Mobile Army Surgical Hospital) began as a series of novels in 1968 by author Richard Hooker. The books which were published up until 1977 were loosely based on his experiences as a surgeon in the 8055th MASH in South Korea. 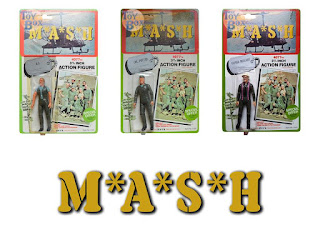 The success of the novels lead to the film M*A*S*H* in 1970 which in and of itself holds some interesting historical facts. First, Roger Ebert claims this is the first movie released which used the F*** word - A claim which has been disputed by many film buffs. Additionally, M*A*S*H* was one of the first three films released for sale on VHS in the United States in 1977. So with that said, it could be argued it's the first VHS tape released to have the F*** word.

The film featured numerous characters, however only four of them made the transition to the television series which ran from 1972 - 1983. Out of those four, only two retained the "job" of their characters from the movie - Gary Burghoff who played Radar O'Reilly and G. Wood who played Brigadier General Hammond. The other two actors, Tim Brown and John Fujioka played minor roles, and in the case of Fujioka, played multiple ones. 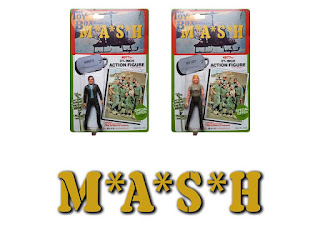 While several M*A*S*H* toys had been produced prior to Tristar International's 1982 line, these would be the first to feature 3 3/4 inch style figures. Each one featured multiple points of articulation, and rightly so considering they were designed in the style of the soon to be majorly popular G.I. Joe line. 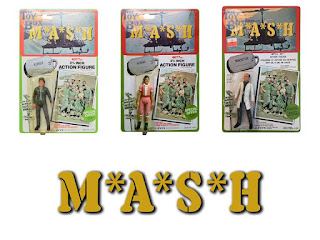 The series included eight figures, one of which was a variant of Klinger, three vehicles and a playset. All and all, this wasn't a bad line. In fact, it could be argued had it been released a little earlier, say 1976 to 1980 it may have been even more popular as this was a peak time for the series in terms of viewers.

Unfortunately with the television series ending a year later, so to did the toy line. Before you knew it the toys were shuffled off to clearance isles, and pushed into obscurity to become one of those nostalgic items which a lot of people to this day didn't even know existed.

As we mentioned above, there were two versions of Klinger released. One in a pink dress, and another in his army fatigues. What's interesting to note is if you look at the back of the package, only the version in the pink clothing is advertised as being available. The irony of this is that when seller list a set of the action figures for sale, usually the Klinger in pink dress is not included, and to date proves to be the rarer of the two. It's odd the one advertised is the more difficult to find. Perhaps not too many boys were buying pink action figures back in the 80's.

Of course you can't have an 80's action figure line without having a multipack. Tristar produced a nice set which included the characters BJ, Col. Potter, Winchester and Klinger. This was a cheaper way to get a few of the less popular characters for a couple bucks less. 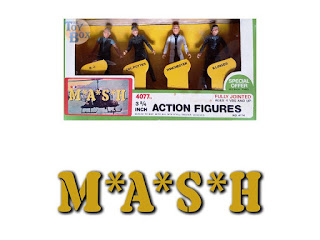 Rounding out the series were a set of vehicles - A jeep, ambulance and helicopter. An interesting aspect to these was the figure included. Not only was this just a random "army figure", but it was the same one packaged with each vehicle. If you look at the face, it could be mistaken for an alternate version of Hawkeye with blond hair. 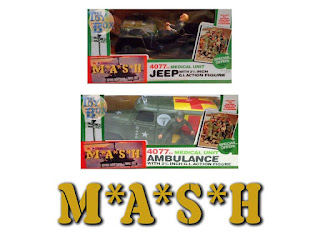 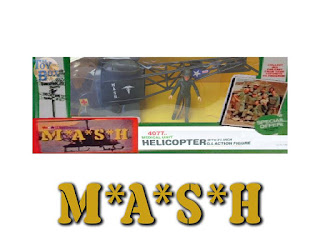 The last item released for the series was a really nice Military Base playset. It featured a role out plastic mat, and several tents and accessories. This massive sixteen foot play area was large enough to not only set up all of the items included in the box, but also all of the figures and vehicles. In other words, it was built to scale to accommodate the entire line! That's not only impressive, but very rare in the world of action figures where items are actually built to scale to be incorporated with each other. 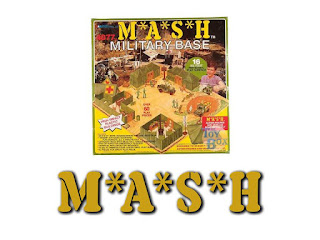 This may very well rank as the most impressive playset we've ever seen, and goes to show sometimes simple is better. Well...Okay, maybe that honor goes to the U.S.S. Flagg from G.I. Joe.

While the majority of the individually carded figures are readily available on secondary markets, the vehicles, playset and (to an extent) the multipack of figures) are fairly scarce. They can be found from time to time, but they're going to cost you quite a bit. The playset alone can sell for upwards of $600.00 in the box. Compared to the figures which can commonly be swooped up in a set of seven (because again, pink Klinger is fairly hard to find) for around $60.00 - $80.00, this is quite a massive jump in price.

Click "HERE" to go back to the home page. For more posts related to this one, please click the labels below.
Posted by The Toy Box on March 05, 2018
Email ThisBlogThis!Share to TwitterShare to FacebookShare to Pinterest
Labels: 1980's, M*A*S*H*, MASH, Tristar International