A Perfect Example Of Why I Won't Go Digital

You want to see a perfect reason why I won't go digital? 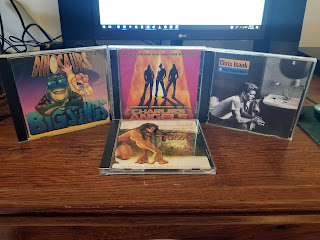 This photo here is why I won't.

"But this is just four random CD's," you say.

Correction. This is four random CD's I paid twenty-five cents each for at a local thrift shop. Why buy digital when you can own the physical media for such a cheap price (and then transfer to digital media yourself)?

Let's break this down even further. Okay, sure I get it. There are probably only one in 100,000 people (if even) who would actually want the soundtrack from the television series Dinosaurs. But, guess what? You can't get it on iTunes. So right there my quarter was well spent.

Chris Isaak and the two soundtracks probably have a broader audience who would want them. Again though - Twenty five cents for Chris Isaak's Heart Shaped World on CD or $9.99 on iTunes. Tarzan on iTunes? $7.99. Charlie's Angel soundtrack on iTunes? Another $9.99.

Sorry, but if I am going to pay those kinds of prices for digital media, then I'll take the real deal all the time. $1.06 (tax of six cents) for four CD's vs. $27.97 for digital versions - And again, coudn't even get one of the four albums via digital distribution. Seems like a no brainer to me. Physical media for the win.

Let's not forget the obvious caveat to all of this as well - I actually own these albums now and am not just renting them.

"But storage," you argue.

My CD rack is two feet long by two feet wide and five and a half feet high and holds about 1,500 CD's. Trust me, that two feet area it sits isn't taking up that much space - and it looks a whole lot more appealing than a list of digital files on a screen.

Click "HERE" to go back to the home page. For more posts related to this one, please click the labels below.
Posted by The Toy Box on March 17, 2018
Email ThisBlogThis!Share to TwitterShare to FacebookShare to Pinterest