It's A Kind Of Magic

Now that things have finally settled in my move and I have my toy room all set up it's time to get back into some photos. 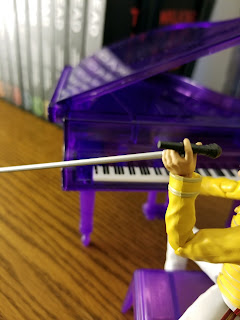 In this Blogger's personal opinion, he was the lead singer of the greatest band of all time. 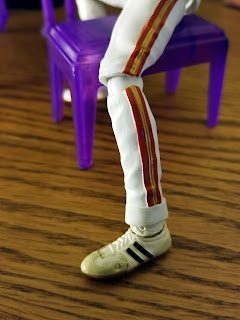 Their albums span twenty-two years, starting with their self titled debut and ending with a posthumous album - A tribute to their lead singer. 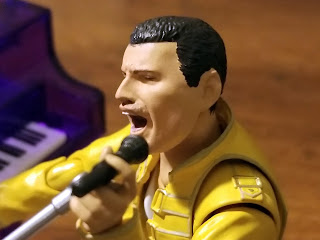 Though Freddie Mercury tragically died of AIDS in 1991, he remains a legacy. 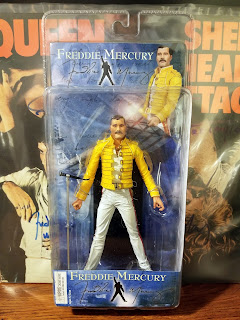 I had my eyes on NECA's Freddie Mercury figure for the longest time, but didn't pick one up until just recently. However, as the figure was in transit from the seller to me I had this thought in my head. I wanted to pose the figure with a piano. Something which would not be achievable in a very display friendly way with NECA's all but statue version. As such, when it arrived I decided to keep it in the package and continue my search.

That's when I found a fantastic version from Bandai / SH Figurarts. This thing boasted a ton of articulation from head to toe and I knew it would work perfectly - Which are the loose photos shown here today.

This figure has articulation in the neck, breast bone, shoulder, bicep, elbow, wrists, stomach, waist, knees, ankles and even toes. In short, if you can think of a pose, you can get this figure into it. 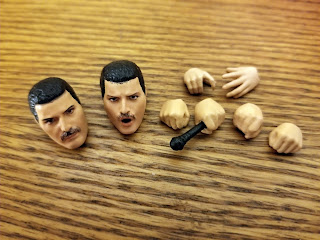 If that wasn't enough, it also features several interchangeable heads and hands as well as two microphones - One on a stand and one without. Unfortunately, there is a downside to this. While the heads easily change out, the hands are a tad more difficult. It took me about five to ten minutes to get the two on that I wanted for posing which is why you won't see any other photos beyond the one above showing the various hands. I didn't dare bother fighting with them to change them around again. 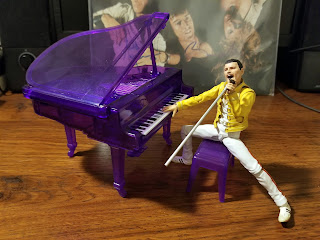 For those of you unfamiliar with Queen, this particular version of Freddie is based on the 1986 Magic Tour which is most notably remembered for its Wembley Stadium venue - A great concert in its own right. It shows the group at their height of popularity and unfortunately their last concert series due to Freddie's illness.

As I mentioned above, I wanted Freddie to be displayed with a piano. The problem was I didn't know where to find one. At first I looked at wooden doll furniture versions, but these were going to cost me two to three times more than I paid for the figure. So, those were quickly out of the question. I then looked at a Barbie piano from 1984, but knowing Barbie was ten to twelve inches tall knew this too probably wasn't the best solution for this figure.

Then I stumbled upon this purple piece... 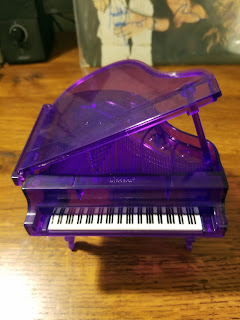 This piano came packed in with Chelsea, Barbie's younger sister. Okay, this was a start in the right direction, but would it be compatible with Freddie? A quick Google search answered that question. Chelsea stands five and a half inches high - The exact same height as this figure. A match made in plastic heaven. 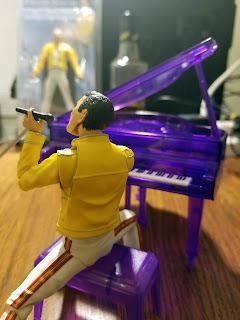 When I initially purchased it I thought I would at least paint it to match a real piano. However, I have to be honest and say the purple color with Freddie's yellow and white clothing really work great together. So, I decided to leave it as is.

The perfect backdrop for this figure to be displayed with is a fantastic record I recently scored; Queen's Sheer Heart Attack... 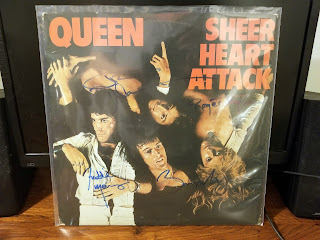 ...Autographed by the band (hopefully). This one is on my list to get PSA certified and I have to be honest and say at a glance it looks pretty legit. I've been able to find signatures on other memorabilia which looks dead on to the ones on this record. The seller also didn't bat an eye when I told him I was going to get it PSA certified. In fact, he took it a step further and said, "You should look into a more reputable autograph authenticator (not a real word apparently). PSA is all opinion based while people who specialize in this field do a handwriting analysis." He also provided a thorough write up of how the autograph was obtained and by who. Typically when you mention getting something authenticated to someone selling fakes they pull the plug and cancel the sale on the spot.

Here's a closer look at those beautiful signatures; 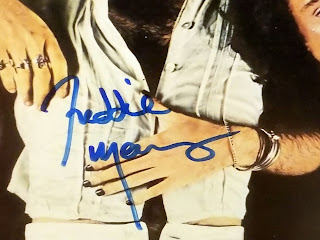 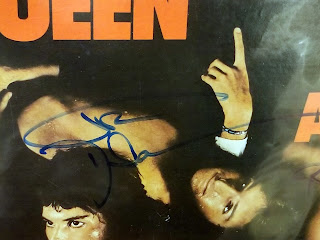 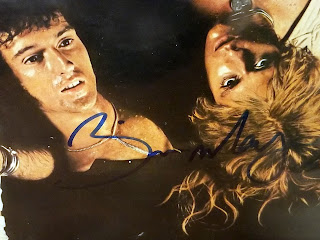 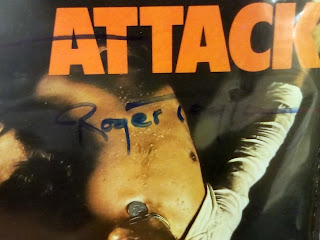 What do you think? Legit? 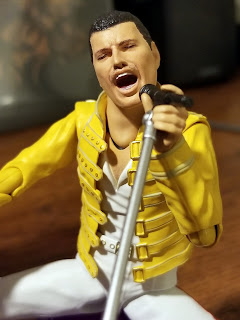 I'll let everyone know what the verdict is.

Click "HERE" to go back to the home page. For more posts related to this one, please click the labels below.
Posted by The Toy Box on March 21, 2018
Email ThisBlogThis!Share to TwitterShare to FacebookShare to Pinterest
Labels: 2000's, 2010's, Bandai, Freddie Mercury, NECA, Queen