Oh, Toy Biz...How you flooded the market with anything Marvel related that you could...That's really not a bad thing.

During its prime, Toy Biz would release everything and anything it could in hopes that merchandise would keep flying off the shelve. At first it did, but as collectors soon caught on that a lot of stuff was just repainted or retooled items they'd already purchased a hundred times over, things started to taper off in terms of profit.

Fortunately for fans / collectors, Vampire wars was not your average repackaging of prior released figures - Well, in look anyway. Instead, it was a fantastic rendering of Spider-Man and a couple "friends" in an all new style, with bulky costumes, and fun accessories.

The series featured only five figures, and shortly after they were released Toy Biz was on to the next thing in their line up of mini series. As such, the Vampire Wars series was one of those blink and you missed it lines - Much like many of the Marvel related sub series that Toy Biz was releasing. 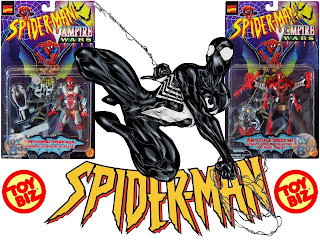 What's not to love about getting a Blade figure? Especially when he's got a backpack loaded with what appears to be axe head missiles! 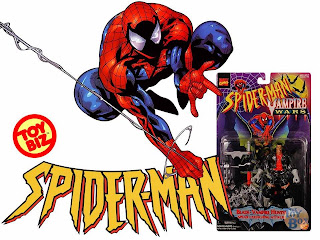 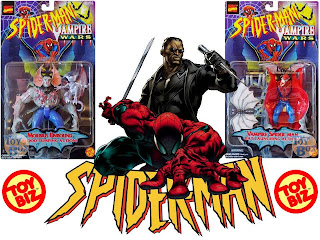 Much like many of the Toy Biz Marvel stuff, you can get these figures relatively cheap. They can sell for as low as $5.00 mint on card if you have the patience to wait for the right seller. Otherwise you'll spend three times that.

Join us next time when we take a look at Tomb Raider!


Click "HERE" to go back to the home page. For more posts related to this one, please click the labels below.
Posted by The Toy Box on November 16, 2015
Email ThisBlogThis!Share to TwitterShare to FacebookShare to Pinterest
Labels: 1990's, Spider-Man, Toy Biz, Vampire Wars